Bärbel Inhelder was an only child, born on April 15, 1913 in St. Gallen, Switzerland. Her mother, Elsa Spannagel, was a German writer. Her father, Alfred Inhelder was a teacher and zoologist. Her family were liberal Protestants, but in her later life she identified as an atheist. As a child, her father fostered her intellectual development by teaching her natural history, philosophy and evolutionary theories. Her mother on the other hand, emphasized literature and wrote children’s stories and plays.

Inhelder enrolled in Rorschach Teacher’s College, where her father taught. She trained to become a school teacher during the Great Depression since teaching would secure her income and livelihood. But because she also wanted to attend university, she took private classes in Latin, the arts, science and math. She ended up taking a French course at the University of Geneva in the summer of 1932 and became involved in the Institute of Educational Sciences, (also known as the Institut Jean-Jacques Rousseau). During this time, she became interested in Freud’s work and in literature about adolescence. She graduated from Rorschach Teacher’s College in 1932 and moved to Geneva where she began her studies at the Institut Jean-Jacques Rousseau.

It was at the Institut that she first met Jean Piaget, who was the co-director, researcher and teacher of child psychology. She was first a student of Piaget’s and then became his volunteer assistant for two years. Inhelder obtained her bachelor’s degree in 1935. With Piaget’s mentorship, she published her first paper in 1936, an experimental study with children and the conservation of quantities. Piaget had asked her to place a cube of sugar into a cup of water and to question children on what they thought happened as the cube dissolved and eventually disappears. She found that children successfully acquire the concept of conservation through observation, experience, and internal reasoning. This became the first published article that solely examined conservation.

Inhelder moved back to her hometown St Gallen in 1938. Here, she worked on her doctoral dissertation on conservation and was offered a position as a school psychologist which she accepted. Inhelder worked with developmentally delayed children and tested their intelligence with conservation tasks, refusing to use the traditional intelligence test that was widely used at the time. She chose to focus on the process whereby children came to their answers, rather than on the end results alone. She discovered that the developmentally delayed children went through the same steps as a normal child, just at a slower rate.

In collaborating with Piaget, she conducted research that led to the publication of their co-authored book The Child’s Construction of Quantities in 1941. In 1943 she finished her dissertation and received her doctorate degree. She then moved to Geneva where she would spend the rest of her life. She was offered the position of a laboratory instructor at the University of Geneva and became a professor in 1948.

Inhelder continued to collaborate with Piaget and together they published prolifically. In the 1950s, Inhelder made another progressive discovery in developmental psychology. She proposed the formal operations stage of development. She suggested that the transition between childhood and adolescence is accompanied by the emergence of experimental/inductive thinking. During this time, Piaget became more focused on genetic epistemology, the term he originated for the study of the development of how we come to construct knowledge about the world. Inhelder on the other hand, worked with her team of young researchers to examine knowledge construction between childhood and adolescence using a more functional approach to genetic epistemology.

In 1953, the World Health Organization held conferences on mental health and invited many rising and established scholars to speak, Inhelder being one of them. The conferences went on for two years and after they finished, Inhelder began to receive invitations to lecture in the United States of America where she was able to meet many American scholars. While she was visiting the Center of Cognitive Sciences at Harvard University in 1961, she was involved in several studies and collaborated in the publication of the book Learning and the Development of Cognition. In this work, how children transition between one stage of development to the next was elaborated. Her involvement with the university led to Harvard’s Radcliffe College offering her a position as full professor in 1968. Inhelder declined the offer, however, and continued to commit to Geneva and her studies with Piaget.

In the 1960s she continued to collaborate with Piaget. At the University of Geneva, Inhelder was given the opportunity to succeed Piaget as the chair of genetic and experimental psychology in 1971. She held the position for 12 years and retired in 1983. During this time, she was also the director of an intercultural research project. Inhelder was situated in West Africa where she worked with Ivory Coast children, using Piagetian tasks to study their development.

In 1983 she retired from her formal academic position but was still active in her scientific pursuits, publishing her last book in 1992 about strategies in problem-solving. She had a multifaceted career in psychology. She was the president of the Swiss Psychological Society (1965-1968) and of the Society of French-Speaking Psychologists (1968-1970). She also founded the Jean Piaget Archives Foundation whose main goal is to collect the research and publications that Piaget inspired. Her admiration for her mentor is evident as she worked at his archives foundation as director and later as chair of the scientific committee. During her career, she received eleven honorary doctorates and was awarded many distinctions and prizes.

Bärbel Inhleder passed away in 1997. She never married or had children and little is known about her personal life. Although she is widely known as Piaget’s collaborator, she had her own distinguished and influential career.

Inhelder, B. (1965) Operational thought and symbolic imagery. European research in cognitive development: Monographs of the Society for Research in Child Development, 30 (serial no. 100, pp. 4-18) 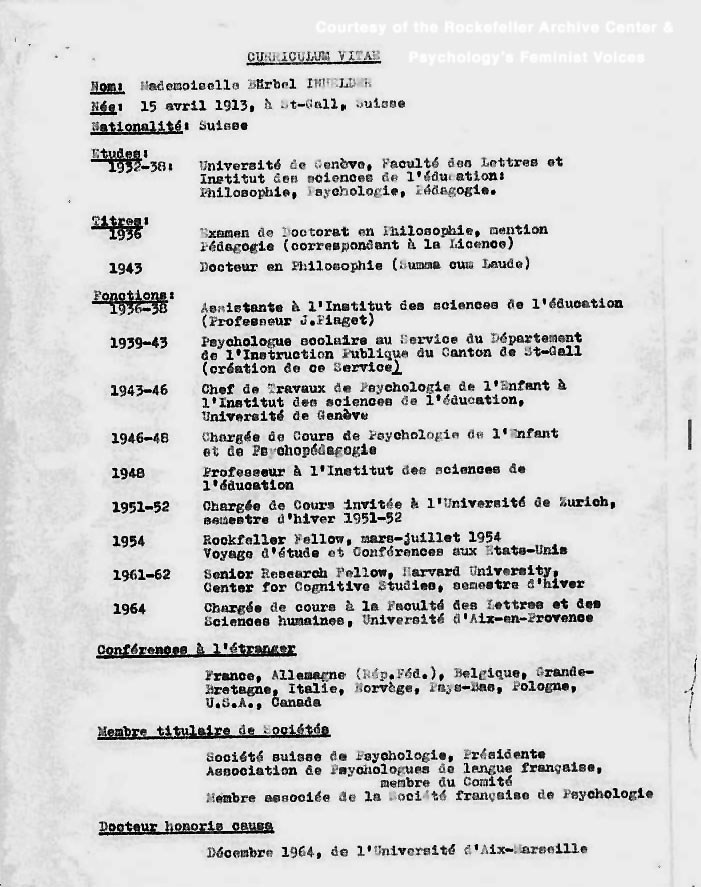