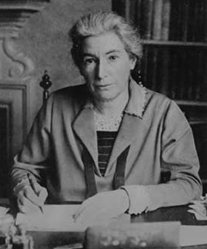 Beatrice Edgell was born October 26, 1871 in Tewkesbury, Gloucestershire. Her father, a local bank manager, and mother, a child of land-owning farmers, saw to it that all of their sons and daughters received a good education. At a time when women were discouraged from higher learning and pursuing careers, this familial support laid the foundation for academic success and a remarkable record of contributions to psychology.

Edgell received her high school education at Notting Hill High School for Girls before earning a BA in mental and moral sciences from the University of London (1894). She obtained a teaching diploma (with distinction) from the University of London and taught secondary school in Sunderland and Blackburn. After two years in the north of England, Edgell returned to Aberystwyth on a scholarship, graduating with a first-class BA in philosophy in 1898, followed by a Master’s degree in 1899.

While pursuing her MA, Edgell began lecturing in the Department of Philosophy and Moral Science (later to become the Department of Philosophy and Psychology) at Bedford College London, where she would remain for the next 35 years. Before her career at Bedford accelerated however, Edgell took advantage of a travelling research scholarship to study what would become a life-long interest: applying the scientific method to psychology. As she would later say in a 1946 paper in the British Journal of Psychology, “the most outstanding feature of psychology was the development of experimental and of quantitative methods.” The first woman to graduate from Würzburg, she spent a year (1900-1901) working on her PhD under Oswald Külpe, the German psychologist who pioneered use of the experimental method to study thought processes. Upon her return to Bedford in 1901, she introduced her students to experimental methodology through her lectures, and set about establishing one of the first psychological laboratories in Britain. This was only the beginning of a long record of ‘firsts’ in her field.

Edgell was the first British woman to receive a PhD in psychology, completing her dissertation entitled “The limits of the experiment as a psychological method” (which she wrote and defended in German) around 1901. She became the first woman professor of psychology in Britain (1927), and was the first woman president of the British Psychological Society (1930-1931), of which she had been a founding member in 1901. According to an obituary published in Nature, Edgell collaborated with fellow BPS members C.S. Myers and W. McDougall to establish the foundations of modern British psychology. Edgell was also the first woman president of the Aristotelian Society (1927), the Mind Association (1927) and the Psychological Section of the British Association for the Advancement of Science (1932).

Her research has stood the test of time. As Elizabeth Valentine notes in her comprehensive biography, Edgell’s doctoral dissertation about the limits of the experimental method as applied to meaningful psychological problems highlights challenges researchers encounter even today. Other studies demonstrate her enduring curiosity in how the mind might be measured. These studies include “On Time Judgement”, in which she sought to investigate whether the midpoint between two sets of such continuous sounds was judged to be closer to the geometric or arithmetic mean—an exploration important to the field of psychometrics. In yet another “first”, Edgell applied the method of bisection to this question and concluded (in opposition to Weber’s Law) that the arithmetic mean was deemed closer. Although critiqued, her findings were supported by much later studies including Eisler’s in 1976.

Edgell’s experimental work with W. Legge Symes on the calibration of the Wheatstone-Hipp chronoscope, an instrument designed to be accurate to 1 millisecond, contributed significantly to the study of mental chronometry. In the early 20th century, psychology was fighting to be recognized as a legitimate scientific discipline and being able to accurately measure mental processes was considered a key element. This chronoscope allowed the measurement of mental processes, but only in so much as the chronoscope itself was precise. By improving the accuracy and proving the reliability of the Wheatstone-Hipp, Edgell helped support psychology’s claim to being a hard science. The accuracy she established in her study in 1906 was not enhanced until tube-based cascade timers and transistors were invented, some 50 years later.

Edgell also undertook experiments on associative memory, one of which involved 1,200 school children aged 8 to 12 and indicated sex differences in memory development around rote learning and learning via mnemonics. Similar studies carried out much later, in 1986 and 1991, found analogous results. Given that, as noted by Valentine, our understanding of sex difference in memory development is still limited, Edgell’s achievement has not been surpassed.

Edgell may not be prominently featured alongside her male counterparts in the history books because she did not found a school of psychology. However, her legacy lives on as much because of her dedication to and mentorship of her students as her contribution to experimental methodology. Edgell believed in her students and quietly rallied for their success; thus, many a female philosophy or psychology student found herself the recipient of mysterious research funding. Women she taught included Victoria Hazlitt, Olive Wheeler, Lucy Fildes and Winifred Raphael, all of whom in turn meaningfully contributed to academic and applied psychology in the UK. Historian of comparative psychology David Wilson believes Edgell and Hazlitt helped cultivate sophisticated experimental research practices, which created a crucial link between the predominantly anecdotal methods of 19th century British scholars and 20th century behaviourists who refined the scientific methodology of Edgell’s group of female psychologists. Edgell’s time at Bedford is “considered the golden years of their psychology department.”

A prolific writer, Edgell produced three books and more than 30 published articles over the course of her career. As with most women of her era who chose to pursue academia, Edgell never married nor had children of her own. Nephews and great nephews and nieces were very much a part of “Aunt B’s” life however, and they later recalled her as fondly as did her students. She was known to all for her good humored charm and congeniality.

After retiring from Bedford College in 1933, she worked in a child guidance clinic, served as a governor of Tewkesbury High School and Tewkesbury Grammar School, and became a member of the Conservation Association and the Women’s Institute in Bishop’s Cleeve. Beatrice Edgell died at age 76 in Ash Priors Nursing Home, Pittville Circus, Cheltenham on August 10, 1948.