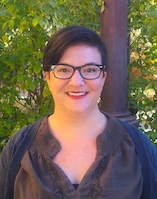 Corey Elizabeth Flanders was born in Great Bend, Kansas on May 2nd, 1988. Despite growing up in a rural and socially conservative environment, Flanders’ childhood home was “militantly feminist,” and she was able to take notice of feminism from a very young age. However it was not until her undergraduate studies that she began to identify as a feminist:

"I had the good luck of having a really great social network. I had activist friends who were into gender equality, sexual identity equality, and reproductive justice. It was a really great environment to explore identity, and make my place within the community. I got involved with a few campus organizations revolving around reproductive justice, queer and allies group, and the commission on the status of women."

As an undergraduate student, Flanders double majored in Psychology and Women, Gender & Sexuality Studies. Unlike many feminist psychologists, Flanders was able to draw upon a feminist perspective throughout all stages of her academic training.

Academically Flanders was very much influenced by both of her parents. Her father was a clinical psychologist and her mother a second-wave feminist. However, starting out at college she said, “I’m going to be my own person, I’m going to do my own thing and be an anthropologist.” And then she ended up just like her parents – who are lovely people.

While psychology was always a part of Flanders' life, she actually did come to the study of psychology on her own. The first psychology course Flanders enrolled in was Psychology of Women. She described the experience as “Hi Ya!”:

"It really resonated with me. I think growing up I thought about psychology from a clinical perspective, with an emphasis on individual behaviour, and I wasn’t quite interested in that. But thinking about group level interactions…how sexism frames our social interactions and gets reproduced into gender roles and things like that, that really struck my interest. I was like, “Oh, this is also psychology, ok great! Maybe this is something I am interested in.”

Flanders described feminism’s contribution to her psychological scholarship as allowing her to always keep “a critical eye and recognizing how systemic differences in power and the perpetuation of oppression can influence how people experience their social identity.”

A primary focus of Flanders’ work has been sexuality. It didn’t take long for her to learn about the severe health disparities experienced by bisexuals and the lack of bisexual-focused research to understand such disparities. Once Flanders became aware of how understudied this issue was, she felt an obligation to make a difference. As a member of the bisexual community, who has been formally trained as a researcher, Flanders felt it was necessary support and advocate for bisexual peoples through research, education and knowledge translation. Having lived experience as a bisexual, Flanders remarked that her insider knowledge “helps in a lot of ways, [because she] intuitively know[s] that some things are at least worth looking into.”

Although Flanders is used to activism feeling like an “uphill battle,” she has generally felt supported researching bisexuality within Psychology. Through Divisions 44, the Society for the Psychological Study of Lesbian, Gay, Bisexual, and Transgender Issues, and Division 35, the Society for the Psychology of Women, of the American Psychological Association, she has been able to connect with psychologists who have helped lay the groundwork for bisexuality to be a legitimate area of study.

Recently Flanders completed a post-doctoral position at the Centre for Addiction and Mental Health in Toronto, Ontario. The team she worked with, Re:searching for LGBTQ Health, conducts community-based research. Since she started collaborating on community-based projects Flanders felt as though “it would be unethical” to not integrate community-based methods into her future projects. In speaking about her commitment to this approach she remarked:

"It comes from the belief that having a critical perspective is important, [that] we have to critique the field of psychology and continue doing so. [That we have to] stay away from a positivist perspective…community-based research facilitates that critique of positivism, because its not just about me as a researcher and expert, assuming that I know how to do everything best and will make this fantastic research project."

Flanders asserted, “Research is [better] when community is involved.” By involving the community, psychologists can assure that the research questions are important to community members. Furthermore, “community members are just awesome researchers.”

Because of her passion, enthusiasm and critical eye, we are excited that Flanders will continue to advocate for the health equity of sexual and gender minority peoples and that she will be mentoring the next generation of feminist psychologists.

Flanders, C. E., & Hatfield, E. (2013). Perceptions of gender and bisexuality: an exploration of the relationship between perceived masculinity, femininity, and sexual ambiguity. Journal of Bisexuality, 13(3), 374-389.