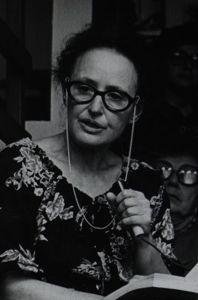 For many people born in the early twentieth century, their entire lives were filled with stories and experiences of war. Born in 1923, Dorothy Dinnerstein was no exception. Her father told her stories of how the First World War had changed the course of humanity. At the age of 12, Dinnerstein saw the movie All Quiet on the Western Front, and recalled being deeply affected by the threat of another war. She was often accused of being a spoilsport because she was unable to ignore her fear of the demise of humanity. Following Hiroshima, Dinnerstein was even more convinced that the extinction of humankind, along with all other species on the planet, was eminent. The Cold War years did not serve to dispel her unease.

Dinnerstein’s legacy in academia came from her ability to turn her anxiety about an impending human disaster of our own doing into excitement about the possibility of change. She led a rich life of activism and intellectual discussion, animated by this impetus for societal improvement. While attending Brooklyn College, she found solace in studying experimental psychology. She worked in the areas of perception and memory and conducted independent study in psychoanalysis. Upon reading the works of Freud, she discovered that her interest in experimental psychology was more of a game to her, while psychoanalysis encouraged her to think critically about the world we live in. After earning her PhD from the New School for Social Research in 1951, Dinnerstein found a teaching position at Rutgers University where she began teaching a course related to psychoanalytical social philosophy. She was also involved in the development of the Institute for Cognitive Studies there.

Rutgers University served as a permanent base for Dinnerstein throughout her career. She retired in 1989, and remained professor emerita until her death. In 1962, Dinnerstein taught her first course in gender studies and became very interested in the subject. She was determined to include a chapter on gender in a book she was working on entitled The Mermaid and the Minotaur. As she began writing, however, she realized that all of her chapters were so in depth that they each required their own book. Dinnerstein considered the social and political environment of the time, and determined that an entire book on gender was the most relevant. That decision led to the publication of her most notable work.

Published in 1976, The Mermaid and the Minotaur looked at gender assignment and its impact on modern day society. She wrote that, “[t]he universal exploitation of women is rooted in our attitudes toward very early parental figures and will go on until these figures are male as well as female,” (Dinnerstein, 1976, p. 102). Dinnerstein argued that the norm of having women as primary caregivers had lasting effects on how both women and men are perceived, and how they behave as adults. The book was widely read and influenced women’s movements around the world. It was translated into seven languages.

The book’s feminist message reflected Dinnerstein’s social and political views. She was an activist by all definitions of the word. She was involved in sit-ins, protests, and peace groups, and was even arrested a few times for her involvement. One arrest resulted from Dinnerstein’s participation in a protest on Wall Street in an attempt to stop the production of nuclear weapons. Another of Dinnerstein’s famous political stands received quite a bit of attention from the government. Outraged by the salary discrepancy between male and female faculty members at Rutgers, Dinnerstein, along with fellow professor Helen Strausser, filed a federal discrimination complaint against the university. In 1974, three years after the official complaint was documented, the government ruled in favour of the female staff and required Rutgers to award them equal pay. This triumph made shockwaves not only at the university, but also around the country. It was Dinnerstein’s tireless dedication to her convictions that made gender equality for faculty possible.

Dinnerstein died in a car accident in 1992. She left behind one daughter and two stepdaughters. Following her passing, a number of articles and obituaries were written about her, and they speak of her strong character and distinct style. She is described as having been a small, round woman with defined features who was interested in engaging people in dialogue. She hated to lecture, and instead wanted her students to have conversations about the tough subjects. Friends remember her for her ability to snorkel, and her signature green mayonnaise that was loaded with dill. One friend wrote that:

Dorothy could transform a discussion of varieties of cheese-making, or methods of fishing and gardening, into an exploration of social and philosophical issues. She could draw anyone into such conversations, with her intuitive sense of the divergent modes in which individuals are best able to articulate their interests and concerns, and because of her natural and abiding respect for human worth. (Herrmann, 1993). 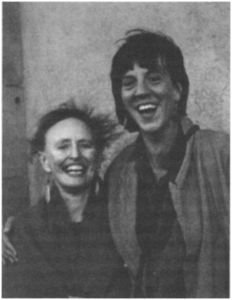