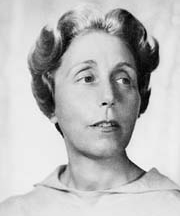 Erika Fromm Papers. The Archives of the History of American Psychology, University of Akron, OH.

Erika Fromm (née Oppenheimer) was born December 23, 1909 into an Orthodox Jewish family in Frankfurt, Germany to parents Clementine (Stern) and Siegfried Oppenheimer. She had two younger siblings. Her mother passed away during an influenza epidemic when Fromm was eight. Her father, a physician, married his sister-in-law and together they had five children. Fromm, the eldest of the eight children, helped to care for her younger siblings and half-siblings.

Fromm pursued training in experimental psychology under Max Wertheimer, receiving her doctorate magna cum laude in 1933 from the University of Frankfurt. Two weeks after her graduation, Fromm was forced to move to Holland due to the encroaching Nazi presence. She worked as a Research Assistant at the Psychology Laboratory of the Psychiatric Clinic of the University of Amsterdam, receiving minimal pay. By this time, Wertheimer and Wolfgang Köhler, both Gestalt theorists, had emigrated to the United States. Fromm wrote to the men asking for their help in finding her employment; they advised her to leave the field, citing a lack of opportunities. She remained in Holland, founding the first Psychology Laboratory in a Dutch State Hospital. In 1936 she became engaged to Paul Fromm, who was still living in Germany at the time. Together the couple had a daughter, Joan. Sensing that the situation in Europe was becoming too dangerous, the Fromms fled to the United States in 1938.

The Fromm family settled in Chicago, Illinois. Erika Fromm worked for a time at Michael Reese Hospital. During the 1940s and into the 1950s, she pursued training at the Chicago Institute for Psychoanalysis. She, along with several of her classmates, were denied their degrees due to a ruling made by the American Psychoanalytic Association that only those holding medical degrees could become psychoanalysts. Fromm campaigned against this ruling for a number of years. As part of these activities she helped to establish the Psychologists Interested in the Study of Psychoanalysis (later Division 39 of the APA).

In 1954, Fromm joined the faculty of the Medical School at Northwestern University. The following year she co-authored a book with Lenore Dumas Hartman, titled Intelligence: A Dynamic Approach. In 1961 she moved to the University of Chicago where she held the position Professor of Psychology. In Chicago, Fromm began conducting experimental research on the topics of hypnosis and hypno-analysis. She viewed hypnosis as tool through which the unconscious could be quickly accessed, which could also provide a solution to lengthy - and therefore expensive - therapy. Fromm further argued that hypnosis was especially beneficial for treating individuals suffering from post-traumatic stress disorder. She published a number of books drawing on her research into hypnosis including Hypnotherapy and Hypnoanalysis with Thomas French in 1986 and Self-hypnosis: The Chicago Paradigm with Stephen Kahn in 1990.

Later in her career, Fromm turned her focus to behavioural medicine, using a combination of hypnosis, meditation, and biofeedback. She co-authored a book on the topic, Hypnosis and Behavioral Medicine, with Daniel P. Brown in 1987. She remained active into her senior years, publishing her final book, Changes in the Therapist, with Stephen Kahn in 2000.

Fromm was recognized with several awards throughout her career. In 1982 the National Academy of Practice in Psychology gave her a Distinguished Practitioner in Psychology award; and in 1985 the American Psychological Association presented her with an Award for Outstanding Contributions to Psychoanalysis. She also received the Arthur Shapiro Award from the Society for Clinical and Experimental Hypnosis for her publications twice, once in 1973 and again in 1991. Erika Fromm passed away in 2003, at the age of 93, in her home in Chicago.