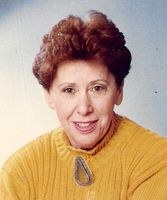 Over the course of her career, Esther Halpern made significant contributions to a variety of psychological fields including developmental, community, and cross-cultural psychology. The daughter of Baruch and Taube Halpern, Esther was born on November 6, 1929 in Braila, Romania. Following World War II, she emigrated from Romania to Canada.

In Canada, Halpern enrolled at McGill University in Montreal, Quebec. At McGill, she earned a Bachelor of Science Honors degree in psychology in 1952, followed by a masters degree in applied psychology in 1954. Decades later, in 1984, she returned to McGill as a visiting professor. Following her studies at McGill, Halpern left Canada for the United States where she obtained a Doctoral degree from Boston University in 1962. Her doctoral dissertation was entitled, "The Effects of Incompatibility Between Perception and Logic in Piaget's Stage of Concrete Operations." A portion of her dissertation, under the same title, was published three years later in Child Development. Working within a Piagetian developmental framework, Halpern examined the relationship between perceptual thinking and logical thinking in children at the concrete operational stage. The results of her research indicated that children who differ in thinking style (i.e., empirically versus deductively oriented), also differ in the number of errors made when problem solving in the context of both logical and perceptual cues, with empirically oriented children erring more when perception contradicts logic.

In the 1960s Halpern worked at the Jewish General Hospital, at Sir George Williams University (now Concordia University), and as the chief psychologist at the Montreal Mental Hygiene Institute, all in Montreal. During this time she turned her attention to the use of the mental health consultation approach in community based psychology initiatives, including school psychology. She encouraged the adoption of a mental health consultation approach by school psychologists, emphasizing this approach's benefits to the navigation of the psychologist's role within the school, particularly in relation to the teacher.

Her work on the mental health consultation approach continued with positions as Assistant Professor of Psychology at Albert Einstein College of Medicine at Yeshiva University and as Project Director of Mental Health Services at the Neighborhood Maternity Center at Lincoln Hospital, both in New York. At the Maternity Center, Halpern conducted a pilot project on the activities undertaken by community psychologists during mental health consultations with health care providers, specifically aimed at uncovering the content of such psychological consultations. Using a record keeping approach, she documented that consultations often take place as a result of non-psychopathological concerns. Her later work on community psychology explored the extensive network of psychologists involved in the Israeli educational system.

Halpern was affiliated with the Graduate School of Education at Harvard University from 1968 until 1970, at which point she married and moved from the United States to Israel. In Israel, she established and directed the Clinical Child Psychology Program at Tel Aviv University. She was a faculty member of the Psychology Department at Tel Aviv University for the rest of her career. The clinical training program she established emphasized the importance of clinical experience for psychologist's working in school and community settings. Halpern's training model was later adopted by other Israeli universities.

Halpern's community psychology research continued with the outbreak of the Yom Kippur or October War of 1973. Her own volunteer work with the widows and orphans of soldiers led to research on the mental health benefits of volunteering for both volunteers and those receiving aid. She interpreted volunteering as a natural phenomenon that takes place during crisis. In her two-phase scheme of volunteer work, initially a large number of volunteers act to fill in gaps in support systems, while in phase two a smaller number of volunteers, who have themselves gone through similar experiences, offer long term support as informal caregivers. Later research with orphaned children, found that they establish informal support systems that offer similar supports as adult self-help groups.

From the 1980s on, Halpern focused increasingly on cross-cultural psychology. She emphasized the importance of developing indigenous psychologies, citing the need for indigenous psychology as central to the training of psychologists conducting family therapy in Israel. As part of her initiatives in this area, Halpern promoted organizations like the International Council of Psychologists, emphasizing the role such organizations play in the internationalization of psychology. The international focus of her work also encompassed research on women. She contributed to a cross-cultural examination of the stresses experienced, and the adaptive strategies employed, by female psychologists. In her final published work, Halpern co-edited, along with Florence Denmark, Herbert Krauss, and Jeri Sechzer, Violence and Exploitation against Women and Girls, a volume offering international perspectives on violence against women as well as strategies and techniques for reducing its occurrence.

Halpern, E. (1965). The effects of incompatibility between perception and logic in Piaget's stage of concrete operations. Child Development, 36(2), 491-497.