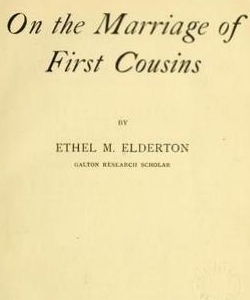 Ethel Elderton was a statistician and researcher who worked for Francis Galton, gradually working her way up the ranks of the Eugenics Records Office and earning Galton's respect. Born into a well-educated and mathematically inclined family, Elderton's father died when she was only twelve and thereafter her mother ran a school to support the family. Elderton's introduction to Galton in 1905 came at the recommendation of her former university professor at Bedford College, Dr. Alice Lee, who worked for Karl Pearson. Elderton abandoned her teaching job to become Galton's assistant, throwing herself into the statistical work and wholeheartedly embracing the eugenic cause.

Elderton's first assignment was collecting data on 'large and thriving families' for the proposed Golden book of noteworthy families, essentially a eugenicist Who's Who. When this book came to naught, she moved on to do research on resemblances between different sets of relatives, meant to determine the inheritance of ability. Galton's methods called for an extensive set of measurements to be taken of a subject's mental and physical characteristics which then allowed for correlations to be calculated to determine the relative influence of heredity and the environment. Elderton would turn this method to alcoholism, controversially concluding that it was factors innate in individuals that predisposed them to alcoholism, therefore social reforms were useless and perhaps even harmful for the future of the race.

Elderton was similarly concerned with the falling English birthrate, and reported on the social conditions of the lives of working men and women of Northern England in Report on the English birthrate: Part I, England north of the Humber. The proliferation of information about birth control was one suspect in the declining birthrate, another was the harsh working conditions in textile factories. Elderton's analysis focused on the question of whether there was a class difference in birthrate and whether the abortion and birth control methods women were using were likely to hamper the progress of the race. As such her paper offers an unparalleled glimpse into the horrific abortive practices of women in late nineteenth England-for example, lead based abortifacients were common, often resulting in lead poisonings which led to paralysis and even death. Elderton's detailed qualitative account, based on the reports of the women's physicians and chemists, was one of the first to show how widespread abortion was and highlight its contribution to the declining British birthrate. While Elderton's strict eugenic training meant that she did not approve of proposed social reforms which would help women have more children (such as providing free milk and medical services), she was careful to stress that the declining birthrate was not the result of women's emancipation. Instead she emphasized the declining economic value of the child, as a result of an industrializing society and new education laws.

Elderton was probably initially hired by Galton because women were considerably cheaper to employ then men. But her excellence in her work impressed Galton and played a large role in counteracting his prejudices against women in academic work. It appears that Elderton's abilities were very respected by Galton and his colleagues. In a 1907 letter to Galton, in which Karl Pearson complained about the faulty radiators in the laboratory and lamented the recent resignation of Dr. Alice Lee (the radiators were apparently the last straw), Pearson says "I know only one person of her equal in rapid and correct calculation and that is Miss Elderton; we must keep the latter at the Eugenics Laboratory, if we can." In his reply Galton expressed his sympathy for Pearson and Elderton's colds and his interest in Elderton's next proposed project. In a time of little workplace opportunity for women, Elderton progressed through the ranks of the Galton Eugenics Laboratory, becoming secretary for the Eugenics Records Office, then appointed Galton Research Scholar, and then the Galton Fellow. Finally, after receiving her doctorate, she became Assistant Professor in the Galton Laboratory shortly before her retirement in 1933.

Elderton, E. (1909). The relative strength of nurture and nature. London.

Elderton, E. (1910). A first study of the influence on parental alcholism on the physique and ability of offspring. London.

Elderton, E. M. (1914). Report on the English birthrate: Part I, England north of the Humber. London.