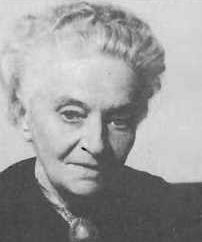 Helene Deutsch was one of the most prominent female leaders in psychoanalysis. She was the first woman to lead Sigmund Freud’s Vienna Psychoanalytic Society and she contributed significantly to theory on the psychology of women that expanded the purview of Freud’s male-dominant ideas about women.

Deutsch was born on October 9, 1884, in Przemysla, Poland. She was the youngest of four children, having two older sisters and a brother. Her parents, Wilhelm and Regina Rosenbach, were Jewish. Helene’s family survived the Nazi occupation, although it is not clear whether they survived the whole war. At the age of 16 she became involved with a much older man who was a Social Democratic leader, Herman Lieberman. He was married, however, and a divorce in those days was politically out of the question.

Although formal education for women was not possible in late 19th century Poland, Deutsch received private tutoring which enabled her to enroll at the University of Vienna in Austria. Wanting at first to become a lawyer like her father, she considered herself a leader in female liberation. In the early 20th century, medicine was still an exceptional field for women; only seven women entered medical school at the University of Vienna when she was admitted in 1907. After reading Freud’s Interpretation of Dreams, she became interested in psychoanalysis. She was impressed by Freud’s theory of infantile sexuality and the unconscious and also his protests against society. During a vacation from medical school, she attended a socialist congress where she listened to the speeches of women socialist leaders Rosa Luxemburg and Angelica Balabanoff. She was impressed by their power and by the fact that their gender was not an issue, and she asked herself “Why with my temperament, talent and ambition haven’t I achieved their status?”

While spending a year in Munich in 1910-1911 studying with Emil Kraepelin, Helene broke off with Lieberman. She met her future husband Felix Deutsch, who was a physician in internal medicine. They married in 1912, the same year that Deutsch received her Doctorate in Medicine. In 1917, she gave birth to her only child, Martin. The couple remained married until Felix Deutsch’s death.

During her studies at the University of Vienna, Deutsch met neurologist Julius Wagner Ritter von Jauregg and began to work in Vienna University's Psychiatric Clinic. In the fall of 1916, she left the clinic in order to work with Sigmund Freud in Vienna. She learned from Freud by undertaking a personal analysis with him which lasted about a year. In 1918 she became a member of the Vienna Psychoanalytic Society, one of the first women to join the society. Later, in 1923, she went to Berlin for a second personal analysis to work with Karl Abraham, where she also learned about the Berlin Psychoanalytic Institute’s training facilities. In 1924 she became the first woman to head the Vienna Psychoanalytic Training Institute, leading the women’s section from 1924 to 1933. She was also one of the most successful teachers in the history of psychoanalysis.

Deutsch began her career looking at narcissism in men and women. In 1924, she became interested in women’s sexuality. A year later in 1925, she published Psychoanalysis of the Sexual Functions of Women and became the first psychoanalyst to write a book about feminine psychology. She wrote to her husband about the book, “It brings something new to this terra incognita in analysis. I believe it is the first ray of light on the unappreciated female libido” (Deutsch, 1925, p. vxi). Her interest in the subject helped to push Freud into writing articles about female psychology. At the same time, Deutsch was discovering the importance of motherhood. Other psychoanalysts of the period, such as Sandor Ferenczi, Otto Rank, and Georg Groddeck, were also intrigued by the role of mothering in personality formation and disorders of narcissistic self-esteem. But Deutsch was the pioneer, taking up this subject and insisting on its significance for female psychology.

In 1930 Deutsch visited the United States to attend the First International Congress of Mental Hygiene. By this time, she was looking for a new position. In 1935, she left Vienna and moved to the United States with her family. She decided to settle in Boston, Massachusetts, because at that time a new Psychoanalytic Training Institute was being founded there and a psychiatric department at the Massachusetts General Hospital was being established. Deutsch became an Associate Psychiatrist at the Massachusetts General Hospital and she served as president of the Boston Psychoanalytic Society from 1939 to 1941.

During World War II, Deutsch wrote a two-volume book, The Psychology of Women, published in 1944 and 1945. Within Freud’s system of thought, she added her own insights about women’s sexuality derived from her personal experiences as a women and clinical observations.She was especially interested in “women’s inner conflict between motherliness and eroticism” - a conflict which she experienced herself. According to Deutsch, the fact that women had a more intense inner life was because they were a unique source of human potential. Her most famous clinical concept was the "as-if" personality, a notion that allowed her to spotlight the origin of women's particular ability to identify with others.

After her husband’s death in 1964, Deutsch’s rate of publications seemed to increase. She published her collection of essays called Neuroses and Character Types in 1965, and followed this with two monographs in the late 1960’s. She published her autobiography, Confrontations with Myself in 1973.

Helene Deutsch died at the age of 97 on 29 March 1982 in Cambridge, Massachusetts. Her contributions had an impact not only on the development ofAmerican psychiatry, but also on the future of women in medicine, psychology and other careers. In her biography, Paul Roazen writes, "Helene Deutsch was an independent-minded woman, who wanted to assert a viewpoint different from that of either traditional psychiatry or conventional analytic wisdom.... Her whole life meant a challenge to the prevailing standards of her society” (Roazen, 1985, pp. viii, ix).

Deutsch, H. (1973). Confrontations with myself: An epilogue. New York: Norton.