Reflections on Racism and Sexism

Inspired by the power of the women in her life, Jessica Henderson Daniel describes herself as a womanist. She grew up in the Civil Rights era and comments that "Even though the faces...of the Civil Rights movement were men, the reality that we knew, even then, was that it was women. And now, of course, there are books and writings that tell us about the role of women...my mother was one of those women."

Henderson was born in San Antonio, Texas to a military family. Her family frequently relocated and her first year of university was spent in the Philippines. She completed her undergraduate degree at a historically Black college in North Carolina. She recalls, "It was an energizing time because we were thinking about change. It was a period of sit-ins and more active change, with some legislation, but it was really [energizing] when people took to the streets..."

The experience of training at a Black college gave Henderson a sense of affirmation that she could be who she wanted to be. After graduating in 1964, she continued on as a graduate student in psychology. In 1969, she was awarded a doctorate degree from the University of Illinois-Urbana.

As a psychologist, Henderson Daniel has been dedicated to creating spaces for the inclusion of marginalized voices and to empowering young students of colour. She jokes that, as a mentor, she supports students with food:

Henderson Daniel now works as an associate professor of psychology in the Department of Psychiatry at Harvard Medical School. Beginning in the 1970s, her role at the Harvard Medical School was to act as a mentor to all students of colour. In 1995, however, when enrolment had grown among racialized populations, the department began to realize how unfair this was to Henderson Daniel. Nevertheless, this change did little to stop her from realizing her goal of promoting all students of colour through ongoing mentorship.

After spending over thirty years attending research presentations by White people describing Black communities, Henderson Daniel asked an unwelcomed question: "I went to a meeting and in my best, most pleasant voice and most pleasant affect, suggested...that wouldn't it be marvellous for there to be collaboration between White and Black researchers. It was like I dropped a bomb in the room..." This hostile reaction has been a motivation for Henderson Daniel's important work providing leadership training to young researchers of color. She realized that in addition to good food and good books, people need to begin to have intimate conversations with each other and build professional support systems. Each year, Henderson Daniel facilitates a retreat for fellows and interns at Harvard Medical School to look at the intersection of their race, gender, and psychology. She describes this experience as powerful and states that "at the next meeting, they talk to each other in different ways about things that they've never talked about before."

Next Generation, a program she established in 1998, has been another powerful medium through which Henderson Daniel has promoted women of colour as leaders in research. The goal of Next Generation is for researchers who are women of colour to develop skills for securing "multi-year, million dollar grants." This mentoring program started when she began speaking to people about her idea and collecting small seed grants. When she had raised $46,000 she hosted her first symposium at a resort. Describing the ingrained racism, she notes that "the person at the desk thought they were a basketball team, even though they were all doctors." The program was so successful that several participants have been awarded prestigious career awards.

Henderson Daniel dreams of replicating this program each year, with programs for Black women, Latina woman, Asian woman and Native American women, eventually bringing all of the women together. Henderson Daniel is without a doubt changing the face of psychology. With her training and mentorship she is creating confidence in many young researchers who will go forward and challenge the inequalities and disparities that are embedded within mainstream health research.

In 2018, she became the first African American woman elected president of the American Psychological Association. 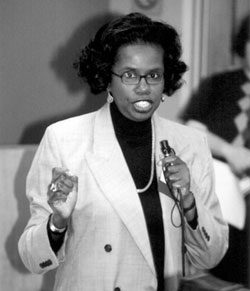