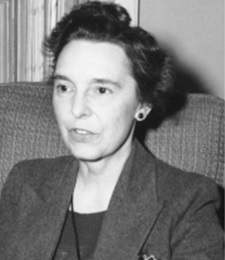 Katharine May Banham was the first woman to earn a PhD at the University of Montreal during a period when women were discouraged from obtaining academic careers. Born in 1897, Banham grew up in Sheffield, England where she attended the Sheffield High School for Girls. It was during a geography lesson that Banham first became intrigued by psychology. The class was given slips of paper recycled from old examination books on which to write the names of the bays and capes of England. Banham, who finished before her classmates, turned her slip of paper over to find notes on the association between concepts of similarity and contiguity. Despite her unfamiliarity with this material, Banham decided at that moment that when she grew up she was going to learn more about those topics. Banham’s next acquaintance with psychology came three years later when she was asked by a psychologist from London, Katherine Johnston, to participate as a subject in psychological tests which had previously been published in France. Unknown to Banham, Johnston was one of Cyril Burt’s assistants working on the standardization of the 1908 Binet-Simon intelligence tests. Banham admired Johnston’s friendly and kind demeanor which influenced her desire to one day become a psychologist.

During Banham’s last year of high school she became certain that she wanted to study psychology in university. While at her school library, Banham discovered the two-volume work The Principles of Psychology by William James. She became fascinated by the book and spent every day “in the classroom late in the afternoon, reading until it was too dark to see the fine print. The vast realm of the mind, as opened up before me in William James’ beautiful language, became more than ever a topic of absorbing interest to me.”

Banham decided to study psychology at the University of Manchester where she received a B.Sc. and was the first student to register there for an honors degree in psychology. After completing her undergraduate degree, Banham spent the following year enrolled in a teacher training course in Manchester for a diploma in education. However, Banham wanted to pursue psychology further and enrolled at the University of Cambridge for graduate studies. Banham described her year at Cambridge as the “height of bliss” and became actively involved in the Society for Psychical Research and the Moral Science Society. She studied with such luminaries as W. H. R. Rivers, Charles Myers, Frederic Bartlett, and Charles Sherrington. However, despite completing graduate work, Banham was not awarded a degree; Cambridge degrees were not conferred on women at the time. She decided to immigrate to Canada where she was offered a lecturer position at the University of Toronto.

Between 1921 and 1924 when Banham was teaching at the University of Toronto, she enrolled in graduate school and obtained an MA in 1923, working with George S. Brett. The following year, Banham married J.W. Bridges and joined him in Montreal where he worked as a professor in the department of abnormal psychology at McGill University. Here, Banham became involved in psychological studies on juvenile delinquency with her husband and was appointed as a staff member at the McGill University nursery school. However, the nursery school received no support from the psychology department at McGill as most of the grants were given to the Faculty of Medicine. In addition, none of the psychology faculty members or students showed any interest in conducting research there, which meant that Banham was the sole researcher.While working at the nursery school, Banham developed a genetic theory of emotions in which she argued that the origins of mental health problems began during infancy. Banham's research was funded by the Rockefeller Foundation. However, since there were no other research programs at the facility, the Rockefeller Foundation withdrew its support in 1930.

Without this funding, Banham was without a job. However, this also left her time to pursue her own growing research interests in child psychology. She began graduate work at the University of Montreal where she studied the emotional and social development of infants. Her research included observations at the Protestant Foundling Hospital, Montreal Children’s Hospital, and Creche d’Youville. Banham thrived during graduate school and published numerous articles and books including Social and Emotional Development of the Pre-School Child,Emotional Development in Early Infancy, and A Study of Social Development in Early Infancy. Banham earned her PhD from University of Montreal in 1934.

In 1946, Banham joined the faculty at Duke University in North Carolina, becoming the first female psychologist in the psychology department. She was recruited to help start a clinical psychology training program. Her research focused on children’s behaviour and social and emotional development. She contributed innovations in psychological methods by creating several rating scales, some of which are still used today to measure the emotional, social, and motor development of children and adults. In 1967, Banham retired from teaching at Duke University but continued her research on children at the North Carolina Cerebral Palsy Hospital.

Banham paved the way for other women to become psychologists in an era when few women had careers outside of the home. She supported and praised women psychologists who, she argued, could “make important contributions to the science and practice of psychology, partly because of the fact that she is a woman, with biological and cultural assets in her favor, her viability, and her concern regarding family affairs.”

Banham, K. (1958). Maturity level for reading readiness: A check list for the use of teachers and parents as a supplement to reading readiness tests. Educational and Psychological Measurement, 18(2), 371-375.