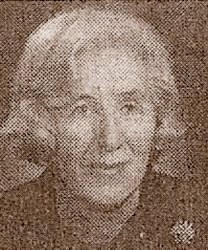 This interview was conducted by C. Roger Myers on June 3, 1969 and is housed in the C. Roger Myers Oral History Collection, Canadian Psychological Association Archives, National Archives of Canada (CPA Archives, MG 29 I 161).

Leola Ellen Neal was born in Merlin, Ontario in 1911. She was the first daughter of a merchant father and a stay at home mother. She also had a younger sister named Connie. Even though her parents did not go to university, they valued education. Neal's maternal grandfather was equally invested in education, having helped to establish the first school in Merlin. Neal grew up and went to school in Merlin. When Neal was eight years old her father passed away. In her fourth year in high school, she went to continuation school, where she took extra math courses after hours, offered to students who wanted to go to university. As a result of Neal's desire to go to university, the family decided to sell their property and move to London. Neal completed grade 13, something not available in Merlin, there. During that time, the University of Western Ontario was being established in London.

Neal started her undergraduate studies with an Honours Math course at the University of Western Ontario in 1929. In her second year, she became ill. She took her doctor's advice and decided to finish her degree by taking a General Program instead of an Honours Program. She took various courses including philosophy, Latin, scientific French, sociology and English and graduated from the General Program. She was fascinated with the philosophy course taught by Dr. Liddy. He advised Neal to take a psychology course with him and a child psychology course from Doug Wilson. Her good grades in the child psychology course caught Dr. Wilson's eye, and he offered Neal the opportunity to do graduate work. In the fall of 1933, Dr. Liddy made her the assistant in the Department. She started her Masters at the University of Western Ontario. She took courses to cover her undergraduate Psychology degree in the first year of Graduate school.

In the summer of 1934, she was assigned to work in the Brockville Mental Hospital in Ottawa as an intern through Myers, who was a consultant for the Ontario Hospital System at that time. Neal had become very interested in schizophrenia. She learned about the Stanford-Binet test during her internship at the hospital. In her second year, Neal wrote her M.A. thesis on "Cultural isolation as a possible cause of schizophrenia". She studied North American Indians on an Indian Reserve on Muncey, and compared them with a group of patients to find out whether mental illness in the Indian group was caused by isolation.

Neal finished her M.A. in 1935 and was one of only three students to get an M.A. that year from the University of Western Ontario. She started her teaching career first as a demonstrator, and then she became a teaching fellow and continued to teach until 1939 at the University of Western Ontario. She taught Introductory Psychology, Experimental Psychology, Statistics and various other Psychology courses in different years.

Neal's interest in schizophrenia continued. Neal interned at the London Mental Hospital in the summers of 1935 and 1936, and following two summers away in 1937 and 1938, continued to intern at the hospital until 1942. She subsequently served as a paid consultant to the hospital and helped with the intern training program. Seeking further training in clinical psychology, she spent eight weeks in 1937, at her own expense, visiting the Boston Psychopathic Hospital, the Judge Baker Guidance Center, and the Walter E. Fernald State School. Coming back to London, she started teaching psychological testing courses and supervised students who wanted to learn assessment skills. In 1938, she went to the University of California at Berkeley to study with Jean Walker McFarlane, Harold E. Jones and Mary Cover Jones for one term. She took a clinical psychology and a mental deficiency course from Dr. McFarlane and worked with her in a longitudinal developmental study of normal children.

Just as she was planning to go to University of California at Berkeley to study for her Ph.D., World War II broke out. Because of this, she applied to the University of Toronto in 1940. She received a Reuben Wells Leonard Scholarship in her first year and the Northway Fellowship the following year. At the same time, her genuine interest in psychiatry and patients suffering from mental illness led her to work in the Toronto Psychiatric Hospital while completing her Ph.D. in 1942.

Leola Neal died in 1995. She was the Dean of Women and Professor of Psychology at the University of Western Ontario for more than 20 years.

Neal, L. (1942). A clinical study with a verbal classification test. Bulletin of the Canadian Psychological Association, 2, 33-34.

Viecili, M. A. (2010, September). The passion and pursuit of education: A biography of Leola Neal. Newsletter of the Section on Women and Psychology, Canadian Psychological Association 37(1), pp. 9-10.