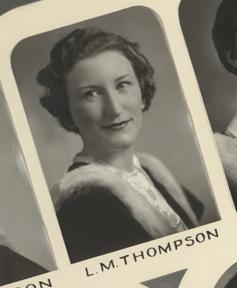 This interview was conducted by C. Roger Myers on June 29, 1970 and is housed in the C. Roger Myers Oral History Collection, Canadian Psychological Association Archives, National Archives of Canada (CPA Archives, MG 29 I 161).

Louise Marjorie Thompson was born in Saint John, New Brunswick to a devoutly religious Anglican family in 1916. She was the youngest of five children, with one older brother and three older sisters. Her parents were born in New Brunswick and her father worked as a machinist for a local newspaper company. Throughout high school and into the early part of university, she aspired to become a high school teacher.

After taking one year off to teach, Thompson decided to further her education and enrolled in the Bachelor of Education program at the University of Edinburgh in Scotland in 1938. The Bachelor of Education was a joint degree offered through the departments of education and psychology. While in Edinburgh, she also set aside time to enjoy the arts, attending numerous ballets, operas, and symphonies. Her stay in Scotland came to an abrupt end during the summer of 1939, due to the increasing turmoil in Europe preceding World War II.

In 1939, at the age of 23, Thompson returned to Canada to begin her academic career at the University of New Brunswick as a lecturer. She continued to lecture here until 1942, when she was accepted to Yale University. She continued her studies in the field of education at Yale, while simultaneously completing courses in clinical psychology. Although she was registered with the Faculty of Education, she completed all her clinical courses at Yale’s prestigious Institute of Human Relations. In 1944, she completed her dissertation entitled The Role of Verbalization in Learning from Demonstrations, which highlighted the importance of communication between teacher and student when learning procedural tasks. Thompson was subsequently offered a research position at Yale; however, she declined because she longed to return to Canada.

In 1944, she returned to the University of New Brunswick as a full professor of psychology and education, and became the first female to be granted a faculty appointment at this institution. In addition to her heavy teaching load, she founded a psychological service centre to aid students in course and career selection by providing them the opportunity to undergo psychological testing. Thompson and her colleague published a paper entitled The Relation of College Aptitude Scores to Performance in College Courses, which analyzed the predictive value of the tests utilized by the psychological service centre. Another of her research interests during this period was the practical application of language in propaganda and image creation in World War II. She published a study in the Bulletin of the Canadian Psychological Association which empirically investigated this issue entitled: The Role of Verbalization in Forming Attitudes.

In 1950, Thompson joined the Faculty of Graduate Studies at Dalhousie University in Halifax, Nova Scotia. After living in Halifax for one year, she married a businessman named William Willard Welch. Between 1952 and 1955, she was very productive in her academic career, publishing four articles: The Psychologist as a Teacher (Welch, 1952), Recent Studies in Adolescence (Welch, 1953), The Meaning of Maturity (Welch, 1954), and Review of Educational Psychology (Welch, 1955). In 1952, Welch became only the third woman in Canada to be elected to the Board of Directors of the Canadian Psychological Association. In 1953, she became pregnant with her first son, making her the first pregnant faculty member in the history of Dalhousie University. During the 1950s, women were pressured to leave their academic positions once they were married, and returning to a faculty position after a pregnancy was unprecedented. Welch firmly challenged these sexist norms by refusing to resign after she announced her pregnancy and demanding to return to her position after the birth of her son. Remarkably, the university gave in to her demands. Welch continued to teach at Dalhousie even after the birth of her second son, until 1957 when she finally decided to retire from her full-time position to spend more time with her family.

In 1964, William Welch was transferred to Omaha, Nebraska for work and the family followed. While in Omaha, Welch joined a paediatrician in a research project investigating the long-term outcome of poisoning in childhood, carried out in collaboration with the Children’s Memorial Hospital. Following the completion of this research project, Welch was offered a full-time position as the sole staff psychologist for a federally funded Children and Youth Program, created to provide health services to children living in poverty. Subsequently, she became a member of the Douglas County Mental Health Advisory Board and used this position to advocate for improved access to mental health services for children. Welch was dedicated to altering the community’s tendency to neglect the well-being of children and articulated her beliefs in an interview conducted in 1970:

…I think the number one job that should be done here is to pay more attention to the children, to give them a better chance in life, not more things, but to give them more time, more parental guidance, a more substantial home life and certainly a lot more guidance and direction.

Although Louise Thompson Welch’s contributions to the history of Canadian psychology have been largely overlooked, she is nevertheless an important female pioneer in both educational and clinical psychology. Her career achievements included research, teaching, clinical practice, and policy development. Welch’s ground-breaking accomplishments have undoubtedly helped to pave the way for future generations of Canadian women pursuing careers in academia.

Thompson, L. M. (1945). The role of verbalization in forming attitudes. Bulletin of the Canadian Psychological Association, 5, 110-114.