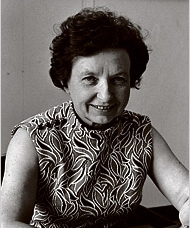 Marian Radke, born on March 2, 1918 in Horicon, Wisconsin, is well known for her research in developmental psychology and developmental psychopathology. Her work in child development is considered to be groundbreaking and many of the topics she studied were regarded as being controversial for her time.

At MIT, Radke's career continued to flourish. She not only taught psychology at the Institute but also worked alongside influential social psychologist Kurt Lewin at his newly established Research Center for Group Dynamics. Radke also taught psychology at Queens College in New York and at the University of Denver.

Radke's research in the late 1940s and early 1950s was important in setting a precedent for future research on the topics of child racism and prejudice. Her book They Learn What They Live: Prejudice in Young Children,coauthored with Helen G. Trager, was one of the first books to discuss the origins of racism, self-hatred, anti-Semitism and prejudice in young children. The book was based on their study of 250 students between the ages of 5 and 8 years at public schools in Philadelphia. The study was so significant that in 1954 it was cited in the Social Science Statement that influenced the Supreme Court in its landmark Brown v. Board of Education ruling that made segregation by race illegal in public schools.

In 1949, Marian Radke married Leon J. Yarrow, a fellow psychologist. Leon was employed at the National Institute of Child Health and Human Development and was married to Marian until his passing in 1982.

Along with her colleague Carolyn Zahn-Waxler, Radke-Yarrow studied altruism in young children. Her studies showed that a child as young as 12 months old could demonstrate empathetic behaviour such as touching, patting, and other comforting gestures to an adult or child in distress. Their findings were contrary to the earlier assumption that altruistic ability developed in children around six years of age.

The Wilson House, an old stone house, was Radke-Yarrow's laboratory at the National Institutes of Health (NIH). Her laboratory stood out among the other biomedical laboratories at the NIH due to its "homey", familial nature. Many of her longitudinal studies were conducted in her laboratory with subjects coming to her house on a yearly basis. Her research included interviews, experiments, and observations of the children and families that she studied.

Her studies were commended for mimicking the characteristics of a real-life environment even though they were conducted in her laboratory. In one such study, she showed how depression in a parent can affect a child's mental health. Her laboratory served as a "homey" apartment for a family while researchers videotaped the family interactions through two-way mirrors. Radke-Yarrow's research showed that children as young as 5 can suffer from depression. This ran contrary to earlier beliefs that only older children could suffer from depression. Her studies also showed that offspring of depressed mothers did not always become depressed themselves due to the resilience they are able to gain from other social factors in their lives.

In 1973, Radke-Yarrow visited China. Two years later she published a book titled Childhood in China about the research she had done on child-rearing practises while she was in the country. Her contributions to the field of psychology are wide-ranging. In addition to teaching psychology, she served on various editorial boards of several psychological journals, lectured in the United States and Europe, and even served as a psychological adviser to the U.S. Army.

On several occasions, Radke-Yarrow was recognized for her accomplishments and contributions to the field of developmental psychology by her colleagues. She received a 10-year McArthur Foundation grant to lead a research group in studying early development. She was also a recipient of the prestigious G. Stanley Hall Award, the highest honour bestowed on by the American Psychological Association (APA). She also served as president of the APA's Division of Developmental Psychology from 1962-1963.

Marian Radke-Yarrow died on May 19, 2007 at the age of 89 of leukemia at her home in Bethesda, Maryland. She leaves behind a substantial intellectual legacy on the relations between development, personality, and society.