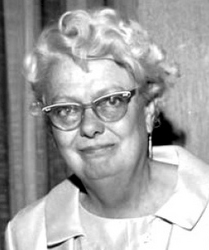 This interview was conducted by C. Roger Myers on April 9, 1973 and is housed in the C. Roger Myers Oral History Collection, Canadian Psychological Association Archives, National Archives of Canada (CPA Archives, MG 29 I 161).

Mary Louise Northway was born in Toronto on May 28, 1909 to A. Garfield and Lucy Northway (nee McKellar). She was named after her paternal aunt, Mary Northway, who had earlier completed a degree in mathematics at the University of Toronto. Her paternal grandfather, John Northway, was a successful businessman, whose first business success was in ready to wear ladies garments. He established two companies The Northway Company Limited, and John Northway and Son Limited, which established successful clothing stores throughout Ontario. Northway's father joined the family business. Following her mother's death from tuberculosis a couple of months after her birth, Northway lived with her paternal grandparents until her father remarried when she was six years old. Although her grandfather was not well educated himself, he was a great proponent of education and one of the strongest influences in Northway's life.

Northway was raised in Toronto where she attended Rosedale Public School, Branksome Hall kindergarten, and Bishop Strachan School where she excelled in mathematics. Her first encounter with psychology came when, as a child, her friend Adele's father, Taylor Statten, gave the girls a group intelligence test. Both Northway and her friend Adele scored a 128 or 129 on the test, which was as high a score as could be obtained.

Although Northway had been raised in a Baptist family and her paternal grandfather had contributed financially to McMaster University, a Baptist institution, she opted to attend the University of Toronto with her school friends. At seventeen years old, in 1927, she entered university at University College at the University of Toronto. During her second year at university she became interested in philosophy, but at Christmastime, she experienced what she describes as a "psychological disturbance" (Northway, 1973, p. 17), but what was at the time diagnosed as a physical illness. As a result, she spent a year and a half north of Toronto living in a cabin, recuperating and reading. It was during this time that she began to read psychological publications. Upon her return to university in 1930 she enrolled in the psychology honours program.

Northway completed her bachelors degree in 1933. She then completed her masters degree in a year, though it was a difficult process: "...in those days, there was an oral and this is where I was taken down a much deserved fall because I presented my MA and Chant wouldn't pass....this was traumatic having skipped easily through everything you see and this was my life work with MA. I kicked up a row about it, I went to see Bob and told him that in affect[sic], this was a very good MA and that Mr. Chant was deluded not to realise....Well it turned out that a bit of it had to be revised--, but that was a very good experience" (Northway, 1972, p. 24-25).

Northway then spent a year studying with Fredric Bartlett at Cambridge University, something that was made possible through her family's money: "father put up the money...it was - $1,200 for the year living there, tuition everything else" (Northway, 1972, p. 25). Women at that time were not able to obtain degrees from Cambridge, yet despite this inequality, Northway never felt any less important because of her sex during her time studying with Bartlett. She had considered continuing her studies with Bartlett, but returned to the University of Toronto in 1936 to complete her doctoral degree due to family obligations; it was in this year that her grandmother passed away.

In 1938 she completed her doctoral degree under Bill Line at the University of Toronto with a dissertation on Bartlett's theory of remembering. Her contact with Bill Blatz increased following her return to Toronto from Cambridge, when she was assigned a $300 a year assistantship at the Institute of Child Study. This was despite no sustained training in child development or any real interest in the topic. As part of the assistantship, Northway filled in for Blatz when he was unable to attend the lectures of the courses he was teaching and worked in the nursery every Monday. Among the other female graduate students Northway encountered during her time at the University of Toronto was Mary Salter Ainsworth, of whom she recalled,

Mary Salter wasn't afraid to express here [sic] opinions and in those days I told her I considered her obnoxious, absolutely because she was pretty -- and there used to be tremendous competition for the few jobs that were available like speaking to home and school clubs and she always got them. (Northway, 1972, p. 34).

Northway first joined the staff of the University of Toronto in 1933 as a Reader, later rising to Assistant Professor before her retirement from the psychology department in 1963. She was also a lecturer at the Institute of Child Study from 1938 to 1968 and Supervisor of Research at the Institute from 1951 to 1968. During this period she also worked as a counsellor and program director at Glen Bernard Camp from 1931 to 1939 and served as director of research and education for the Ontario Camping Association from 1930 into the 1940s. Her involvement with the camping movement continued throughout her career. Northway also served as Director of the Northway Company from 1948 to 1960 and as president of the company from 1960-1963, at which time the company was dissolved. With funds from the dissolution of the company, Northway established the charitable trust, Neathern Trust, which financed child welfare related intiatives.

In 1939, with the start of World War II, Northway took on additional responsibilities at the University of Toronto. As she put it:

You all go off to war which leave a very small crew of us at home with a great feeling of responsibility, you know the saving of psychology and doing everybodies[sic] job without a qualm. So even I taught clinical and experimental psychology....So you see you've got nasty Mary Salter off to war so that the field was wide open, the opportunities were great and they were all justified by the war effort. (Northway, 1972, p. 40)

Northway's research specialty was sociometry, particularly sociometry of childhood, a field in which she was a pioneering researcher. She coordinated a multi-decade longitudinal sociometric study at the Institute of Child Study, a project that came to use computers in the 1960s. Changes in institutional support for the Institute of Child Study, notably a change in emphasis from research to teaching, led to Northway's retirement in 1968.

In 1969 Northway and Dorothy Millichamp, also formerly of the Institute of Child Study, founded the Brora Centre, a non-profit organization for child development research. The Centre opened in 1969 and operated until 1978. Northway and Millichamp first conceived of the Centre while in Brora, Scotland and it was from Brora that Northway's paternal grandmother Catherine (Mackay) Northway's family had emigrated during the Highland clearances.