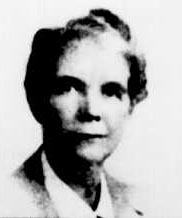 Maud Amanda Merrill is perhaps best remembered today for her work with Lewis Terman on the revised Stanford-Binet intelligence scales. Born in Owatonna, Minnesota on April 30, 1888, Merrill spent her childhood in an orphanage as the daughter of the institution's director.

In 1911 Merrill completed an undergraduate degree at Oberlin College in Ohio. She spent the next eight years working as Research Assistant to Fred Kuhlmann, the head of the Minnesota Bureau of Research. Assigned to the Minnesota School for Feeble-Minded in Faribault, Minnesota, during these years Merrill published research on the assessment of children's reading ability, as well as female delinquency.

Merrill's work with the feebleminded continued after her 1919 move to California for graduate study. She received a Master's degree in education from Stanford University in 1920 for her study entitled The Relation of Intelligence to Ability in the "Three R’s” in the Case of Retarded Children. Three years later she obtained a doctoral degree in psychology from the same institution. Both degrees were completed under the supervision of psychologist Lewis Terman and the latter resulted in Merrill's 1923 dissertation, On the Relation of Intelligence to Achievement in the Case of Mentally Retarded Children. From 1920 to 1924 Merrill also served as an instructor in psychology at the university.

During her time at Stanford, Merrill worked with Terman on his longitudinal study of gifted individuals, eventually published as Genetic Studies of Genius. She worked briefly on the project in the early 1920s (from 1921-22) while still a student. In 1924, by then an Assistant Professor in Stanford's Department of Psychology, she became involved in the study once more and continued to contribute to the project until her retirement in 1954. Her contributions to the study included training fieldworkers to collect data, as well as a longstanding role as statistical consultant to the project. In 1931 she was promoted to the rank of Associate Professor.

Merrill collaborated with Terman throughout her career, but was also heavily involved in other projects. In 1920 she began a psychological clinic for children and soon also took on regular consultancy work for the San Jose Juvenile Court. Both her work in the clinic and with the juvenile court system gave Merrill and her students the opportunity to engage directly with delinquent children and those experiencing psychological difficulties. This clinical work served as the basis of Merrill's 1947 book, Problems of Child Delinquency.

Through her work with the court system, Merrill met Judge William Frances James, a strong supporter of psychological work with children. The two married in 1933. Occasionally referred to by some as Merrill-James (or Merrill James), by all indications Merrill did not change her name after marriage.

Merrill and her husband lived together on the Stanford University campus throughout their marriage. After James's death in 1966, Merrill continued to reside in her campus home until her death at the age of 90 on January 15th, 1978.

Merrill, M. A. (1917). A note on the distribution by grades of defective delinquent women in an institution for the feeble-minded. Journal of Psycho-Asthenics, 22, 175-177.

Merrill, M. A. (1924). On the relation of intelligence to achievement in the case of mentally retarded children. Comparative Psychology Monographs, 2, 1-99.

Terman, L. M., & Merrill, M. A. (1937). Measuring intelligence: A guide to the administration of the new revised Stanford-Binet tests of intelligence. Boston: Houghton.