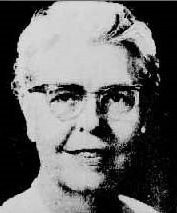 Nancy Bayley was born September 28, 1899 in The Dalles, Oregon. She was the middle child of five born to parents Prudence Cooper Bayley and Fredrick W. Bayley. The Bayleys were a family of pioneers. Her maternal ancestors emigrated from Holland to the United States and settled in Oregon by way of covered wagon. Her paternal grandparents sailed around Cape Horn en route to Victoria, British Columbia, where her grandfather was a member of the British colonial government.

A sickly child, Bayley did not attend public school until the age of eight. Despite this delay in her early education, she quickly caught up in school. She entered the University of Washington with the intention of becoming an English teacher, but an encounter with E. B. Guthrie in an introductory psychology course changed her mind. She completed both her Bachelor of Science (1922) and Master of Science (1924) degrees in psychology at the University of Washington; the latter degree was supervised by Stevenson Smith. In 1926, she published her master's thesis as "Performance tests for three, four, and five year old children" in Pedagogical Seminary and Journal of Genetic Psychology. This was the first of her nearly 200 published contributions to the field of psychology.

In 1926, Bayley obtained her Doctoral degree from the University of Iowa. Her dissertation research consisted of a study of human fear, using as an assessment instrument a psycho-galvanometer she had borrowed from psychologist Carl Seashore. From 1922 until 1924 she was a teaching fellow at the University of Iowa, and from 1924 until 1926, a graduate assistant at the university. Following the completion of her doctoral studies, Bayley was an instructor at the University of Wyoming from 1926 until 1928.

In 1928, an invitation from Harold Jones at the Institute of Child Welfare (now the Institute of Child Development) at the University of California, Berkeley drew Bayley to the west coast. During her time at Berkeley, she also held several concurrent positions at Stanford University (from 1939 to 1951). It was also at Berkeley that she met her future husband, John R. Reid, who was a graduate student in philosophy. They were married April 1929.

At Berkeley Bayley undertook the longitudinal Berkeley Growth Study for which she is now best remembered. The studies that comprised this project sought to establish standards of physical growth over the course of development, as well as associated standards of behavioural development. Her early growth research sought to ascertain the relationship, across the course of child development, between height and the size of other body parts. The results of this research indicated, among other things, that height was most closely correlated with head circumference.

Data obtained in the Berkeley Growth Study also allowed Bayley to correlate infant size with later adult size. In the 1940s, these results were published as tables that predicted adult height based on current child height. In the 1950s, advances in x-ray evaluation techniques, allowed for a revision of these table to accord with rate of growth, particularly with whether bone growth was still taking place. These tables were important tools for pediatricians and endocrinologists attempting to diagnose and treat growth abnormalities. She also conducted research on the relation of skeletal maturation to height and body build. In addition, during this decade she undertook pioneering research on androgeny.

Bayley is also well known for the scales of mental and motor development she produced. In her own research using these scales, she failed to find a relationship between scores on mental scales taken at different points in the first year of life. This led her to speculate that there might not be a singular intelligence. In later work, she found not only that intelligence test scores vary across childhood, but also that they vary to different degrees at different times in childhood. Such considerations, led her to conclude that intelligence is determined by the interaction of heredity and environment throughout development, something that complicates any attempt at prediction.

In 1954, Bayley left Berkeley for an appointment as chief of the child development section at the National Institue of Mental Health (NIMH). At the NIMH, she was involved in the National Collaborative Perinatal Project (NCPP), which used her scales of mental and motor development as a measure of infant development at 8 months. Altogether 50,000 children were assessed as part of the NCPP. Prior to the use of Bayley's scale in this project, she revised and standardized the scales, in the most exhaustive test standardization process undertaken up to that time. Her later research examined the test-retest reliability, examiner reliability, and item reliability of these developmental scales.

Also during her time at the NIMH, Bayley undertook research on the relationship between maternal behaviour, particularly child-rearing practices, and child mental development. Further research, investigated the consistency of mother-child relationships over time, as well as the determinants of maternal behaviour. In this research, Bayley used newly available computer technology to analyse the massive amounts of developmental data she had collected over the decades.

In 1964, Bayley returned to Berkeley where she served as the first administrator of the Harold E. Jones Child Study Center at what is now the Institute of Human Development. At Berkeley she continued to work on the NCPP, in addition to conducting further work on the Berkeley Growth Study. She also acted as a consultant for a longitudinal study of infants with Down's Syndrome at the Sonoma State Hospital. Although she retired in 1968, she continued to revise the Bayley scales of mental and motor development, and to consult on intergenerational longitudinal studies taking place at Berkeley in later years.

Bayley considered the application of psychological findings to human life the ultimate aim of all psychological research, including her own. In 1931 she and Mary Cover Jones filmed sequences of the development of infant locomotion from 6 to 15 months, with the aim of informing colleagues, and the public more generally, of the findings of developmental research. A further film was made in 1935, documenting their research procedures with an infant from 1 month of age up until 12 months. In addition to her efforts to share her research findings and techniques via film, Bayley personally collaborated with many individuals in other fields, most notably those in the medical profession.

Bayley was a fellow of the American Psychological Association (APA) and the American Association for the Advancement of Science, and from 1961 to 1963 was president of the Society for Research in Child Development. In 1966, she was the first woman to receive the Distinguished Scientific Contribution award from the APA. She received the G. Stanley Hall Award for Distinguished Contributions to Developmental Psychology in 1971 and the APA Gold Medal award in 1982.

Bayley, N. (1949). Consistency and variability in the growth of intelligence from birth to eighteen years. Journal of Genetic Psychology, 75,165-196.