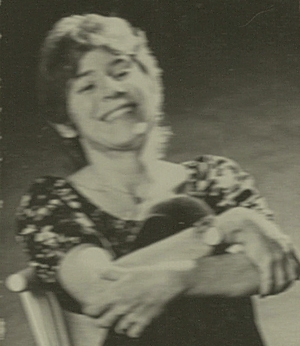 Nancy Datan was born February 17, 1941 in Chicago, Illinois. Despite at times feeling that her intellectual interests were not encouraged because she was female, she attended Chicago's Shimer College and graduated from their Great Books program when she was just eighteen years old. She followed this with a Master's degree from the Committee on Human Development at the University of Chicago in 1961. In 1963, having married young, Datan moved to Israel with her husband. During the decade she spent in Israel, she held positions at the American University in Jerusalem and Ben-Gurion University of the Negev and worked as a researcher at the Institute for Applied Social Research. It was during this period that Datan's identities as both a Jew and a feminist solidified.

In 1971 Datan obtained her doctoral degree from the University of Chicago. Her dissertation, entitled Women's Attitudes toward the Climacterium in Five Israeli Subcultures, was part of a larger project on women's mental health and aging. Datan became involved in this research, a follow-up to earlier research done in the United States, at the suggestion of Bernice Neugarten. Together with medical sociologist Aaron Antonovsky and psychiatrist Benjamin Maoz, Datan later published the results of this research as the book, A Time to Reap: The Middle Age of Women in Five Israeli Sub-Cultures (1981). The work examined the responses of 1,148 women to the loss of fertility experienced with middle age as a function of their subculture. It was found that mental health was highest for those at the two cultural extremes; that is, both modern Central European women and traditional Muslim Arab women dealt best with the changes of middle age. It was the women from transitional cultures, with the least control over their lives, who experienced the greatest mental stress at middle age.

Years later, Datan re-examined this research in her article, "Corpses, Lepers, and Menstruating Women: Tradition, Transition, and the Sociology of Knowledge" (1986); the article earned a Distinguished Publication Award from the Association for Women in Psychology in 1987. In this work, she demonstrated her characteristic reflexivity, examining the assumptions underlying the earlier work on women's reactions to middle-age. In retrospect, she identified a number of problems with the project. For instance, the research suffered from the kind of "exotic bias" typical of the anthropologist. As the object of study, the middle aged woman, was decidedly foreign to the study's investigators, a young female psychologist and her two male colleagues. Additionally, with its initial assumption that it would be women who spent their fertile years near continuously pregnant who would experience the greatest mental health in middle age, Datan characterized the project as proceeding under the "male chauvinist pig hypothesis" (p. 695). The assumption that the more children a woman had the greater her mental health at middle age, she sarcastically termed the "rabbit theory of femininity" (p. 695-96).

All three researchers (Datan, Antonovsky, and Maoz) had gone into the project assuming that menopause would have very different meanings to women from traditional versus modern cultures. She argued, in contrast to her two male colleagues, that it would be modern women - those with the greatest control of their reproductive years - who would experience the greatest mental health at middle age. Yet, as Datan (1986) observed more than a decade later, regardless of subculture "the women in our study welcomed the loss of fertility that menopause brought. And we did not believe them" (p. 695). In 1995, the journal Feminism & Psychology undertook a reappraisal of Datan's now classic 1986 paper, highlighting the prescience of Datan's commentaries on with whom and why we choose to collaborate, who is and is not studied, the positioning of subjects as objects, the privileging of the researcher's views over the participant's, the multiplicity of self, and much more.

Datan returned to the United States with her three children in 1973, having accepted a position at West Virginia University. This move, on the heels of her divorce, was motivated in part by the financial difficulties she faced as a single parent. It was also in the immediate aftermath of her divorce that she, and her children, took on the Hebrew name 'Datan', that of a heretic. In 1984, she moved to the University of Wisconsin-Green Bay, where she became Professor of Human Development and Chair of the Women's Studies Program.

The invisibility of older women in society and social science research, as well as the superficiality of those very few representations of older women that did exist, was something Datan criticized. She advocated on behalf of "the silent majority of aging women" (1989, p. 18) and argued for changes to mental health policy to better support women as they age. She was also critical of psychology's tendency to equate the experiences of older men and women, something that ignored the very different social contexts in which they often find themselves. Consequently, she proposed a "null environment hypothesis of aging" (1989, p. 17) that emphasized that women in old age lack the economic resources often possessed by their male counterparts.

In 1979, Datan married Dean Rodeheaver. A psychology student fifteen years her junior, Rodeheaver adopted her children and later became one of her collaborators. After her death he described her as possessing "a rather tempestuous blend of... elitism, a critical, self-reflective feminism, and an unorthodox but unforgiving Judaism" (Rodeheaver, 1993, p. 107). For her part, Datan singled out the work of Florence Denmark and Rhoda Unger as influences on her identity as a feminist psychologist. A further influence on her work was Bruno Bettelheim. In addition to being a psychologist, Datan was also a published poet and essayist who wrote often about her children, dogs, and husband. Her literary work frequently appeared in Moment magazine.

In the fall of 1986, having completed her first marathon a month earlier, Datan was diagnosed with breast cancer. She underwent chemotherapy and a mastectomy, but the cancer soon spread to her cerebral spinal fluid. It was at this time that she took on another name; the Hebrew 'Naomi.' She spoke openly of her battle with breast cancer and wrote critically of the pressure women faced to undergo reconstructive surgery post-mastectomy. Naomi Nancy Datan, also known by the nickname Duke, died on May 10, 1987, at the age of 46.

Datan's work received relatively little attention from feminist psychologists during her lifetime, something Rhoda Unger (1995) attributes to the fact that "Nancy was way ahead of her time. She wrote from a cross-cultural, cross-generational, cross-disciplinary and multi-situated perspective" (p. 441). Ultimately, Datan (1987) held that, "the task of feminist psychology [is] to expose, explore, and ultimately reject the inequities that begin in the nursery and accumulate over the life course" (p. 185-86).