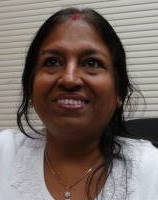 Neelam Kumar was born on June 28, 1955 in Patna, India. She was born into a family of physicians who hoped Kumar would follow in their footsteps and become a family doctor - but she had aspirations of her own. Kumar wanted to go into a field other than medicine and first became interested in psychology when she took a course from an influential teacher, Sister Margaret Mary, at a college in India. Kumar decided to major in psychology for her honors bachelors at Patna University and then continued at the same university to complete her MA in psychology. She then moved to New Delhi to attend Jawaharlal Nehru University where she received an MA in philosophy and a PhD in organizational psychology. Kumar studied the relationship between the research productivity of Indian scientists and organizational cultures based on data from almost 500 Indian scientists working at universities and national labs in four different cities. When Kumar looked at her data, she noticed something that caught her attention. The number of female scientists in her data set was very low compared to the number of male scientists. Out of 500 scientists, only 56 were female.

Kumar delved further into her data to find out whether this imbalance was due to some deficit in female scientists in comparison to male scientists. A belief common among Indian academics (and academics elsewhere!) was that female scientists were less productive, publishing fewer research articles than their male peers. Kumar set out to examine this belief by studying a sample of her data and to her surprise found that female scientists did not differ from male scientists in the number of publications but they consistently occupied lower academic positions. Many of the women had difficulty in advancing their careers despite having similar research work ethic and productivity. This prompted Kumar to look at gender in her research, even though she had not had any a priori plan to do so. Kumar wrote up her results in a paper published in the Indian Journal of Gender Sciences. Her new interest in gender prompted her to organize an international conference in India in 2004 called Is the Glass Ceiling Disappearing?

Studying gender in science opened up new perspectives for Kumar, who had never before questioned gender roles. At home during her childhood, Kumar recalls that she was never discriminated against by her brothers and was treated equally. Yet discrimination against girls and women in India was still very common; many females were not able to receive education and a greater emphasis was placed on the needs of sons. Kumar describes this discrimination beginning in the house where “more money is spent on food for sons and nutritious food is given to boys” while “girls were neglected to a great extent in terms of nutrition and education.” Prompted by her research Kumar began to question these gender roles and realized that even science was not objective and neutral as she had once believed, but was in fact riddled with its own gender-biases.

Kumar has extended her research and has recently published the volume Gender and Science: Studies across Cultures. Issues such as discrimination against women in science are a problem cross-culturally. Kumar’s book includes essays from international women in science who address this discrimination and the role that gender plays in science. Social, economic and cultural factors are also addressed in Kumar’s own research in terms of how they affect the relationship between gender and science.

Indian cultural factors affect girls going into science and math. Kumar states that “girls are expected to cook, look after the house and they try to copy their mother.” She believes that change needs to happen not only within the home, but also in teh education system: a greater emphasis needs to be placed on girls succeeding in math and science. Marriage is another factor that greatly affects women’s educational advancement as many women drop out of college after marriage. As an adolescent, Kumar recalls the same pressures that many girls receive from their parents regarding marriage. Kumar’s parents prevented her from studying at a university outside of Patna until she was married and told her that “once you are married, you are free, you can join your husband and study wherever you want.” Happily Kumar found a husband who was supportive of her career. However, she has experienced discrimination. Kumar was denied a promotion despite her extensive research experience and publications and was not given a reason why the promotion was denied. Retrospectively, she surmises that gender played a role.

Kumar is currently a senior scientist at the National Institute of Science, Technology and Developmental Studies (CSIR) in New Delhi where she has also received a senior research fellowship. She continues her research on the relationship between gender and science and has presented her work at conferences including the Pacific Science Congress, Women in Engineering and Technology Research, and the International Conference of Psychology of Science. She has been awarded the Witkin-Okonji Memorial Award in 2000 which was granted by the International Association for Cross-Cultural Psychology as well as a fellowship by the City of Paris and the Association ECEPIE (Equal Opportunity of Women and Men in Engineering Studies and Careers in Europe).