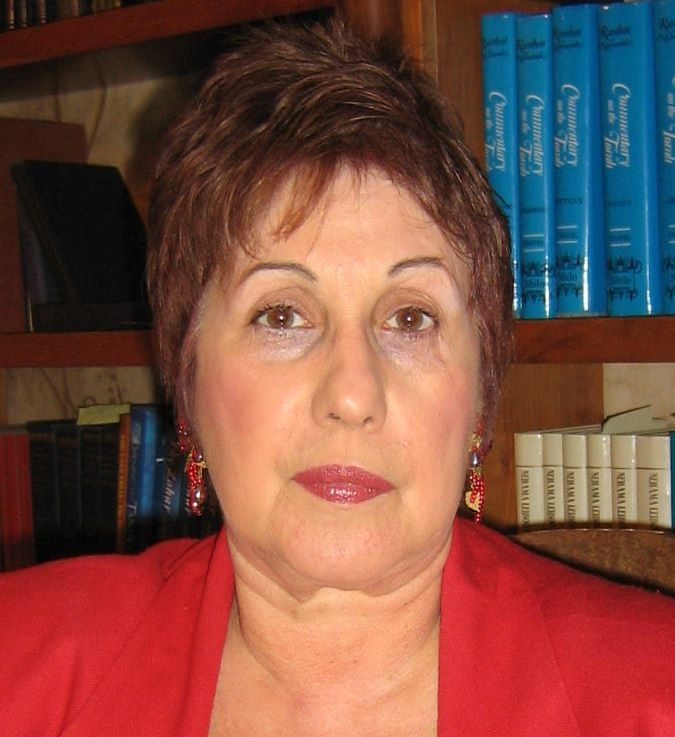 Reflecting on her relationship to feminism, Dr. Phyllis Chesler remarks that she was "certainly always a rebel." Indeed, raised in an Orthodox Jewish family she "rebelled by becoming a member of Hashomer Ha'tzair, which was viewed as a communist, Godless, Zionist organization from hell." While she notes that she was devastated when she was not bat mitzvah'd, at that time she was not able to understand this incident through a feminist lens. It was not until years later that as a young woman she learned the importance of feminism when she "left Western civilization and married a man from Afghanistan." She noted that what she "thought was going to be a great adventure...turned out to be captivity."

Returning from Afghanistan, Chesler became immersed in civil rights organizations and tried to discuss her experiences abroad. She recalls that these groups did not quite "get it yet about women." Towards the end of 1966, she was working in a brain research lab and left the lab "possessed" and "driven" in her white lab coat in search of a meeting of the National Organization of Women. It was soon thereafter that she made a speech about feminist revolution and became a card-carrying feminist.

While heavily involved in the women's movement, Chesler was working towards completing her PhD in psychology with an internship at both a hospital and a psychoanalytic institute. As she describes it, her dissertation was on "observational learning in mother cats and their kittens." Yet feminist activism was slowly beginning to seep into the patriarchal discipline of Psychology. Chesler commented on one aspect of this growing feminist incursion - consciousness-raising groups. She described them as providing "the relief, the blinding, sweet relief of confirmation that one's self is not crazy, or ugly, or wrong, or irrational or overreacting." Discovering the political and structural origins and the commonality of problems women experienced proved to be immensely therapeutic. In fact, much of what Chesler has learned may be traced to the power of collective actions and "what collective consciousness raising [can] accomplish for the soul, [and] for the mind."

Some time in 1969, before or after completing her PhD, Chesler was among the founding members of the Association for Women in Psychology. She and her colleagues then attended the American Psychology Association's (APA) annual meeting in 1970 and she made a controversial demand at the Town Hall meeting: they asked for one million dollars in reparations for the damage psychology had perpetrated on women. The demand drew attention, both positive and negative. Yet despite the enormity of the request, Chesler was dead serious and stated that if she did not receive the reparations to build "battered women's shelters and alternatives to asylums", she would not return to the APA - and she never has. Other feminist members carried on the work of the Association for Women in Psychology and subsequently contributed to the formation of Division 35, now the Society for the Psychology of Women, of the APA.

The importance of feminism was cemented for Chesler through the sexism she experienced within the academy. She was the first woman hired in an all-male psychology department and recalls being assigned by the department to shop for the secretaries' Christmas presents; an assignment she politely refused. She also recalls that she was denied funding to conduct fieldwork in Africa because of sexual advances by the man in charge of the fund. To combat the patriarchal and oppressive atmosphere that she encountered in academia, Chesler was involved in a large scale class-action lawsuit against the City University of New York. Seventeen years later, women won the suit. During this time, she married her second husband and gave birth to a feminist son.

In the 1960s, Chesler developed one of the first Women's Studies courses in the United States. Though this was a great achievement, she urged that feminist thought be integrated into all programs in all divisions. She believed that otherwise, "they are going to ghettoize us and marginalize us and then underfund us and then we will just be talking to ourselves, which is what happened."

Reflecting upon Psychology, she believes that the discipline should become less politicized and more contextualized. Referring, for example, to discourses on the Middle East, she believes that the politicization is totalitarian and needs to weigh and balance historical context. In commenting on anti-Semitism, she describes the resistance among feminist women and feminist psychologists to understanding the racism experienced by Jewish women. Reconnecting her early experience of not being bat mitzvah'd, Chesler notes "my passion for justice has everything to do with my being a Jew."

Chesler's now-classic book, Women and Madness, first published in 1972, examines the history of women's treatment by psychiatry and psychology. It has been translated into many European languages, and into Japanese, Korean, and Chinese. It has sold more than 3 million copies worldwide and was revised and reissued in 2005. While it was a pivotal work for many feminists in psychology and psychiatry, more recently it has been critiqued for failing to consider the history of Black women's treatment in asylums despite drawing heavily on the language of slavery and apartheid to describe white women's experiences.

According to Chesler, one of the books she is most proud of is Woman's Inhumanity to Woman, which she conceptualizes as a continuation of Women and Madness. This book demonstrates that like men, women have also internalized sexist values and that "we are as close to the apes as to the angels, just like men!" To date she has published 18 titles that have explored such issues as the psychiatric demonization of women, feminism, motherhood, custody battles, surrogacy, racism/anti-Semitism, psychology, religion, gender apartheid, honor based violence, and masculinity. Some of her views, especially on Islam, have been controversial and have been challenged by other feminist scholars.

The accomplishments of Phyllis Chesler are as numerous as they are diverse. An Emerita Professor of Psychology and Women's Studies at City University of New York, her expertise as an author, psychotherapist and an expert courtroom witness are internationally known. She has demonstrated a commitment to social justice through lecturing and political organizing around the world. When offering advice for young feminists she reminds us that change is slow and that each generation needs to reinvent their wheel in the pursuit of equity.

Chesler, P. (2005). The Death of Feminism: What's Next in the Struggle for Women's Freedom. New York: Palgrave Macmillan.

Chesler, P. (2003). The New Anti-Semitism: The Current Crisis and What We Must Do About it. San Francisco, CA: Jossey-Bass. 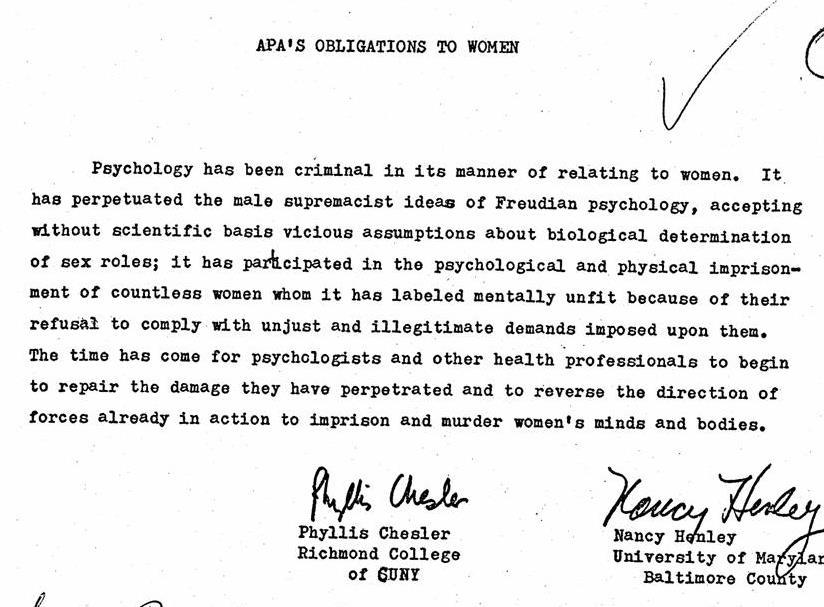 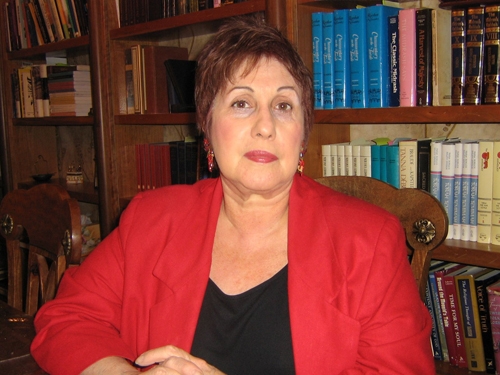 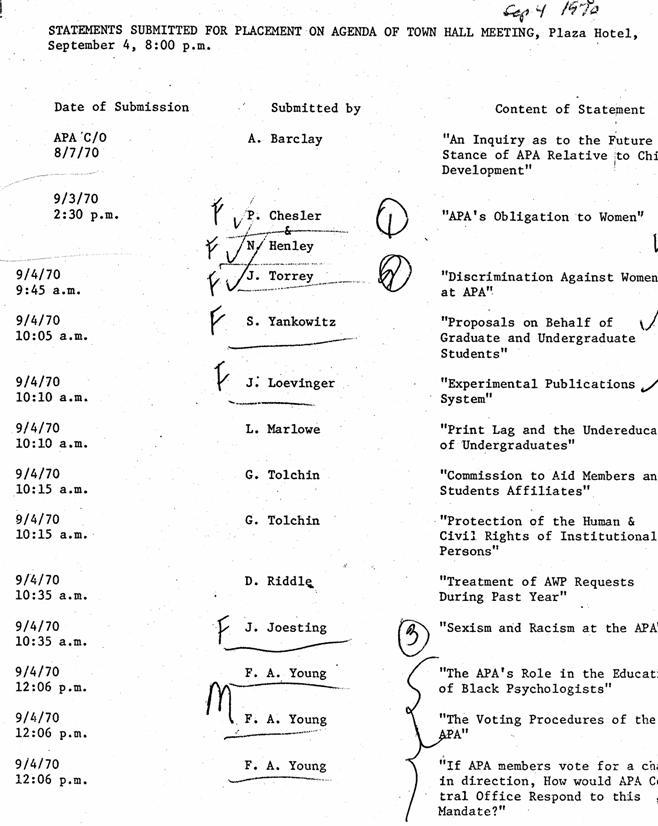