One of the first African American women to earn a Ph.D. in psychology, Ruth Howard's career included related work in social work and education. Born in Washington, DC on March 25, 1900, she was the youngest of the Reverend William James Howard and Alverda Brown Howard's eight children. Her father was a Protestant minister, and her mother was a homemaker who encouraged her children in their educational ambitions. An avid reader at a young age, Howard recalled how she proudly took out a public library book by herself at the age of six. Not surprising, her early career choice was to become a librarian, however, after volunteering at a library, her interest waned and she turned to a career focused on helping disadvantaged people. Exposure to her father's congregation and his attitude toward helping others strongly influenced her decision to enrol in the social work division of Simmons College, Boston in 1920. While many of her classmates had trouble adjusting to the population they were to serve as social workers, Howard cited her exposure to the socially deprived and her experience as a woman of colour with facilitating the transition.

Her first social work job was in Cleveland, Ohio with the Cleveland Urban League as a counsellor and community program coordinator. Her experience working with groups in the community was very different from dealing with single individuals or single families as a case worker. It was, she said, an education in social psychology. Howard then took a position with the city's Child Welfare Agency and focused on children living in marginal family situations and in foster homes. Her work with members of other agencies exposed these individuals' lack of understanding and empathy for cultural groups other than their own. This lack of concern for the cultural and social milieu of the community they were serving, Howard believed, was a barrier to understanding the feelings, attitudes, and behaviours of these children. Realizing the importance of developing this kind of understanding, she decided to study psychology.

Howard applied for, and won, a Laura Spelman Rockefeller Fellowship and, in 1929, enrolled at Columbia University. During her year at Columbia, she took classes at both the School of Education and at the New York School of Social Work, with courses in psychology, child development, and a parent education practicum. In 1930 Howard transferred to the University of Minnesota's Institute of Child Development, as her fellowship allowed her to attend two different universities. Her supervisor and mentor was Dr. Florence Goodenough who, at the time, was working on the Draw-a-Man test, but other female psychologists - Dr. Mary Shirley, Dr. Edna Heidbreder, and Dr. Edith Boyd - were also engaged in child development research at the university during Howard's time there.

For her dissertation, Howard decided to conduct a nature-nurture study by tracking the development of sets of triplets, which offered the possibility of comparing three people from three different eggs, three people from the same egg, and two people from one egg and one person from another. Data was based on 229 sets of triplets, though Howard had personal contact with 29 sets for whom more detailed study was possible. She completed her doctorate in 1934, but her dissertation research would not be published until 1946.

Following her graduation from the University of Minnesota, she married fellow psychologist Dr. Albert Sidney Beckham and moved to Chicago where he was employed. Howard accepted an internship at the Illinois Institute of Juvenile Research which was affiliated with the University of Illinois Medical School. Her internship in clinical psychology prepared her for a career dedicated to children and young people and included evaluation and therapy, as well as experience at a state school for delinquent girls. After her two-year internship, Howard took a supervisory position with the National Youth Administration (NYA) and combined this with a private practice with her husband. They named their practice the Center for Psychological Service, and Howard characterized the marriage as happy and bonded by both the personal and the professional.

Howard was also employed in nursing education and, for 15 years, served as psychologist with the Provident Hospital School of Nursing which provided training for African American nurses. A perceived need to refresh her skills led Howard to pursue postdoctoral studies at the University of Chicago where she studied projective techniques, reading therapy, play therapy, and client-centered therapy with Carl Rogers and Virginia Axline.

In 1964 Albert Beckham passed away. Howard remained in Chicago and continued her private practice work in addition to working as a psychologist at the McKinley Center for Retarded Children (1964-1966), at Worthington and Hurst Psychological Consultants (1966-1968), and at the Chicago Board of Health, Mental Health Division (1968-1972). Howard credited women psychologists with contributing to human progress through the discipline of psychology and noted that so-called minority groups have also shared in this progress. Ruth Howard died on February 12, 1997 in Washington, DC. 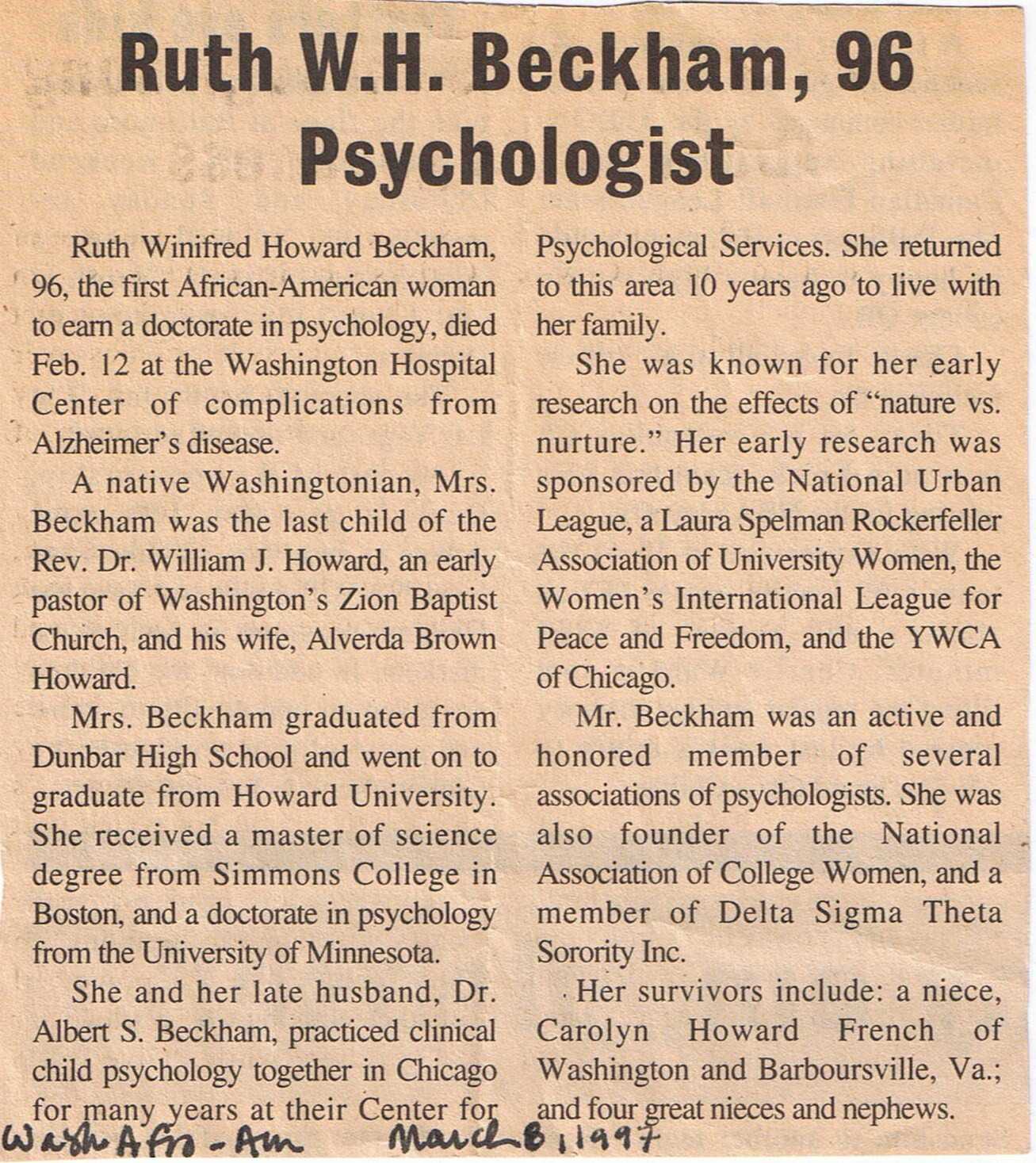