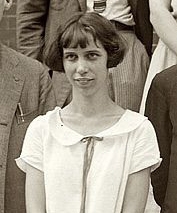 During her remarkably productive 59-year career, Thelma Hunt engaged in a wide range of professional activities. She once remarked of her ability to manage all of these demands: "all my life I've had a tremendous amount of energy, I think largely because of my physiological makeup, so I can do a lot of things, and not wear down right away."

Her energy was already evident in early high school. The Arkansas native moved to suburban Maryland because her father had been transferred to nearby Washington D.C. for work. Hunt's father insisted that she attend the very best school in the area, and so Hunt made the long commute into D.C. every morning in order to attend Central High School. Hunt was an excellent student, and she even found time to teach herself how to swim when she wasn't doing homework or travelling to and from school on public transit.

During her senior year at Central High School, Hunt's Latin teacher encouraged her to apply to university. Knowing that her family didn't have enough money to send Thelma away to school, her teacher found a scholarship to local George Washington University that Hunt was eligible to apply for. Hunt was required to take an exam as part of the application process, and her high scores on this exam won her one of the seven scholarships offered by the university. In 1927, Hunt began her decades-long association with George Washington University.

Hunt was not originally a psychology major. In her first year of university study she thought she would like to pursue chemistry. She did take psychology, however, and one of her professors, Frank A. Moss, persuaded her to major in the field. Hunt claimed that it was not difficult to change her mind on the matter, as the chemistry labs were located in a remote area of the campus and she didn't like the idea of walking so far to get to class.

Early on in Hunt's undergraduate education, she managed to secure a job as a research assistant at the United States Civil Service Commission, where she was involved in the development of psychological tests (or mental tests as they were then called). She remained with the Commission for many years, and in 1923, she worked there full-time while taking a full course load at school. Despite the pressure of being a full-time graduate student and a full-time employee, Hunt still managed to complete her PhD on time, and in fact, she was the youngest person to receive a PhD from George Washington University.

Following her graduation from university, Hunt was informed by her boss at the Civil Service Commission that she would be better off finding a new job. He saw her potential and knew that there weren't any opportunities for advancement there. He couldn't bear to see her waste her talent, and he encouraged her to seek new employment. Hunt understood his motives and decided to look for a teaching position. She didn't care where the position was, so she accepted the first job that was offered to her. This led her to Middle Tennessee State College in 1927. This job was a major pay cut for Hunt, but provided her with an opportunity to move away from home and gain valuable teaching experience.

Her time in Tennessee did not last long. Only one year later, with the urging of her former professor Frank A. Moss, Hunt was offered a job as an instructor of psychology back at George Washington University. After moving back to D.C., Hunt became very involved in a variety of endeavors. She made contributions to the women's program at her university. Still intrigued by science, she decided to enroll in medical school. Hunt worked as a full time instructor while working on her medical degree. During this time she also helped establish and direct the Center for Psychological Services. Two years after receiving her MD, Hunt was made chair of the psychology department at George Washington University. This was a highly coveted position, and it was a huge accomplishment for a woman to get the job in those days. She remained the chair for 25 years. During this time, she also met and married Earnest A. Healy Jr. and was a loving wife until his death in 1966.

In her role as chair of psychology, Hunt helped to develop and implement several programs, including rehabilitation counselling and clinical psychology. Another area the Hunt had a large role in developing was personnel psychology (what would today be considered industrial/organizational psychology). Hunt continued to pursue her interest in test construction, and in 1936 she published her book Measurement in Psychology. She developed several IQ and aptitude tests, as well as the first Medical College Admissions Test (MCAT) with the collaboration of Frank A. Moss. She was also involved in making aptitude tests for medical professionals associated with the war department. While much of her interest at the time focused on testing, Hunt was also fascinated with abnormal psychology. She wrote extensively on the effects of lobotomies, and served as the editor for the Encyclopedia of Psychology.

Hunt always managed to find time for involvement in professional activities. Her interest in personnel management led her to become a member of the International Personnel Management Association. She was also involved in founding the Conference of State Psychological Association (later named the Division of State Psychological Affairs) for the APA. She served on Psi Chi's national council, and in 1985 she was named one of APA's Eminent Women in Psychology.

In 1969, Hunt became a professor emerita of psychology at George Washington University. This did not slow her down, however. She continued to teach there until 1986, marking her 59-year career with the school. She passed away in 1992.