This interview was conducted by C. Roger Myers on December 21, 1976 and is housed in the C. Roger Myers Oral History Collection, Canadian Psychological Association Archives, National Archives of Canada (CPA Archives, MG 29 I 161).

Thérèse Gouin-Décarie is a prominent francophone developmental psychologist. She was born September 30, 1923 in Montréal, Quebec, Canada. The third of four children born to Léon Mercier Gouin and Yvette Ollivier, Gouin-Décarie was raised in Montréal in a devoutly Catholic and politically prominent Quebec family. Her great-grandfather, Honoré Mercier, served as Premier of Quebec from 1887 to 1891, as did her grandfather, Lomer Gouin, from 1905 to 1920. Gouin-Décarie’s father was a barrister, author, and professor, who later entered politics as a senator, while her mother was an artist and playwright whose work was performed onstage in Paris.

Gouin-Décarie’s parents were supportive of her educational pursuits. In describing her childhood, Gouin-Décarie recalls that there were always a number of books around, many related to politics. During her early childhood the family hired a tutor from France to instruct Gouin-Décarie and her siblings in reading, writing, and arithmetic. This was followed by more formal education at the all girl Catholic school, Dames du Sacré Coeur. While the nuns who taught Gouin-Décarie at this school discouraged women from pursuing higher education, the school’s philosophy instructor, Father Marcel Lafortune was more encouraging. He held additional classes in astronomy, Greek, and mathematics to prepare interested students for university until the school’s headmistress halted the sessions. Left without a tutor, Gouin-Décarie recalls that she and her classmates, “climbed the stairs at the University of Montreal and we decided that we would find the professors of chemistry and physics and mathematics at the University of Montreal; and it was wonderful. We found them. The professors were not paid very much at that time, and they were quite ready to give like that private tuition to all four students.” In 1945, she obtained her bachelors degree as a result of this private instruction.

Convinced that she was meant to help others, Gouin-Décarie enrolled in the Université de Montréal and pursued a Master’s degree in psychology. At the Université de Montréal she trained with Father Noël Mailloux and conducted work related to child psychotherapy and early mental life. During this period she also became interested in Freudian psychoanalysis after witnessing sexual imagery in children’s drawings. She received her masters degree for a project on how children integrated the content of their drawings into the stories they told about the drawings.

Around this time Gouin-Décarie broke off her engagement to future Canadian Prime Minister Pierre Trudeau. Soon after she developed a romantic relationship with Vianney Décarie, a future Quebec educational reformer also from a prominent Quebec family. The two moved to Paris, where they were married in 1949. Gouin-Décarie and her new husband then moved back to Montréal and by 1956 expanded their family to include four children.

Upon her return to Quebec Gouin-Décarie accepted a teaching position at the Université de Montréal and set to work on her dissertation, conducting clinical work with children. An encounter with Jean Piaget’s work on the cognitive stages of children’s development influenced Gouin-Décarie’s experimental research and theoretical work. Her dissertation, Emotional Intelligence in Young Children, melded Freudian ideas of mental development with those of Piaget. When published, as Intelligence and Affectivity in Early Childhood, the project included a foreward by Piaget himself.

In the 1960s, Gouin-Décarie undertook a project on the development of children born to mothers who had taken thalidomide during their pregnancy. This research concluded that these children often experienced cognitive deficits. This work was followed by a project in which Gouin-Décarie investigated which objects - both human and inanimate - frighten, attract, or inspire infants. The results of this research were published as The Infant’s Reaction to Strangers.

Her internationally recognized work on child development has earned Gouin-Décarie numerous distinctions. She is a Member of the Royal Society of Canada (1969), an Officer in the Order of Quebec (1994) as well as the Order of Canada (1977), and is the first woman awarded the Léon-Gérin Prize from the government of Quebec for outstanding research in the social sciences. Gouin-Décarie spent her entire professional career at Université de Montréal where she is currently Professor Emerita in the Department of Psychology.

Gouin-Décarie, T., & O’Neill, M. (1974). Some aspects of cognitive development among children suffering from malformations due to thalidomide. Bulletin de Psychologie, 27, 286-303. 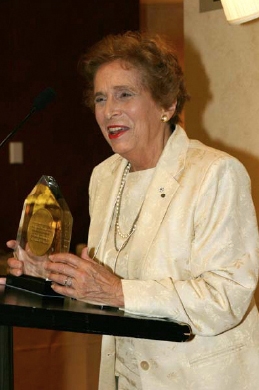 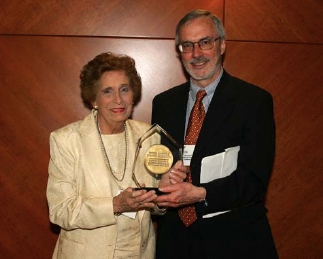