This interview was conducted by C. Roger Myers on December 22, 1976 and is housed in the C. Roger Myers Oral History Collection, Canadian Psychological Association Archives, National Archives of Canada (CPA Archives, MG 29 I 161).

Virginia Douglas played a critical role in researching cognitive deficits in Attention Deficit Hyperactivity Disorder (ADHD) as well as in shaping the direction of clinical psychology training in Canada. She was a trailblazer for women in psychology, serving as the second female president of the Canadian Psychological Association (1971) and the first female chair of the psychology department at McGill University (1983).

Douglas was born in London, Ontario into a Scottish family where “education was everything.” She began her post-secondary education in English and history at Queen’s University, but quickly developed akeen interest in experimental psychology. Her education came to a temporary halt when she married in the third year of university and moved with her husband to Sarnia, Ontario where she worked as a social worker for the Children’s Aid Society. When he chose to do his master’s degree at the University of Michigan, Douglas was able to follow and pursue her own interest in graduate work and earned master’s degrees in both psychology and social work there. She continued on to a PhD in psychology at the University of Michigan where there was a strong emphasis on the scientist-practitioner model, a model she would both integrate into her own practice and promote to others.

Following her husband again, in 1958 Douglas got a job at McGill University to train psychology students as practitioners; this despite the tension surrounding the legitimacy of applied psychology, which was reflected in a salary which “was fiendishly low.” At the time of Douglas’ hire, McGill’s clinical program ended at the master’s level and there were fears that applied psychology would take away from the discipline’s fight to become respected as a science. Douglas eventually succeeded in convincing her colleagues that doctoral students were not going to become “second class psychiatrists,” but “first class psychologists.” This resulted in a PhD program in clinical psychology, based on the scientist-practitioner model and with a strong foundation in empirical research.

Another victory for Douglas was the “sit in” she staged with Muriel Stern, protesting the segregation of female faculty from the main Faculty Club. While the sit-in had many male supporters and resulted in the amalgamation of dining areas for men and women, the win was tougher than they had anticipated, being voted against by one third of the faculty. Despite these frictions which reflect the cultural and social atmosphere of the 1950’s and 60’s in Canada, Douglas speaks fondly of her colleagues, describing the department as one of “mutual respect [with] a live-and-let-live atmosphere.”

Douglas branched outside of the university to shape clinical psychology in Canada. In the 1960s she was invited to participate in the Penticton and Couchiching conferences devoted to the science of psychology and clinical training in Canada, respectively. During her tenure as Canadian Psychological Association President, in 1971 she helped author TheFuture of Canadian Psychology – a phone book-sized tome that detailed a path for clinical psychology training. Douglas carried these efforts on to the international scale, promoting psychology in Cuba during a sabbatical year and later on an international delegation to China as a member of Canada’s Science-Technology organization.

Douglas remains best known, however, for her research on ADHD. As part of her appointment at McGill, she held privileges at the Montreal Children’s Hospital where she was invited to work with Gabby Weiss and John Weary, two psychiatrists studying hyperactivity in children. Thereafter, she became one of the first researchers to focus on the cognitive functioning of children identified as hyperactive, including their attention, inhibition, learning, memory, and motivation. Two of her earliest papers in the field, “Studies on the hyperactive child: VIII. five-year follow-up” (1971) and “Stop, look, and listen! The problem of sustained attention and impulse control in hyperactive and normal children” (1972) went on to become “Citation Classics”, indicating their high frequency of citations in the social and behavioral sciences.

Douglas’ “joy of research” and “true love in the science” of psychology has been recognized in the multiple awards she received, including the Distinguished Contribution Award in 1991 from the Section on Child Clinical Psychology of the American Psychological Association, the Children and Adults with Attention-Deficit/Hyperactivity Disorder Award in 1996 in recognition of outstanding professional achievements in the field of Attention Deficit Disorder, and the Gold Medal for Distinguished Lifetime Contributions Award from the Canadian Psychological Association in 2004. Douglas retired from McGill University after a long and engaged career, and became Professor Emerita. She went into the office and participated in departmental colloquia well into her late eighties. During the last two years of her life she lived in Halifax to be near her son, Donald, and two grandchildren. She passed away peacefully at her residence in Halifax on December 8th, 2017 after enjoying dinner and a movie with her granddaughter and grandson. She was a trailblazer for women, and for Canadian psychology.

by Jennifer Bazar and Prapti Giri (2014), with updates by Alexandra Rutherford (2017)

Douglas, V. I. (1972). Stop, look, and listen! The problem of sustained attention and impulse control in hyperactive and normal children. Canadian Journal of Behavorial Science, 4, 259-282. 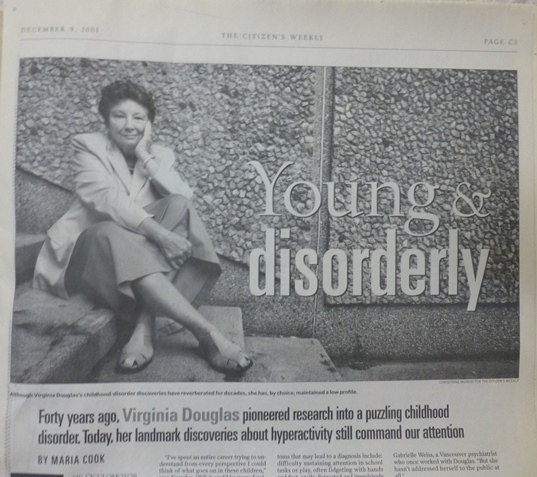 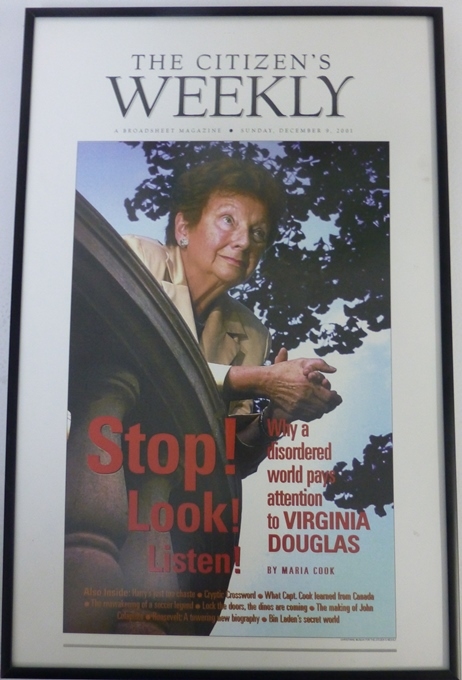 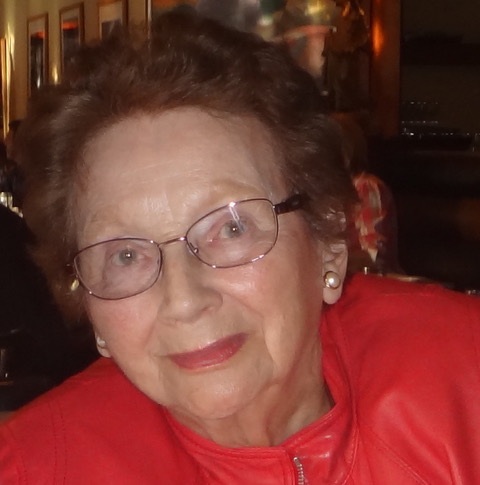 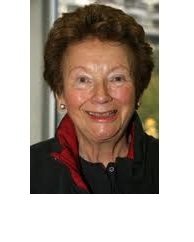