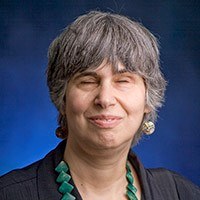 Adrienne Asch, a feminist and pioneer of disability bioethics, was a strong advocate for disability rights and social equality throughout her life. Her devotion to gaining greater disability rights was influenced by her own experience. Asch was born prematurely. As a result of too much oxygen in her incubator she developed retinopathy leading to loss of vision. Asch attended public school in New Jersey which was one of the few states during that time to allow blind children to attend classes with sighted children. Her parents were extremely supportive, and Asch described them as teaching her “to think for myself and to be comfortable with who I was, even if people around me weren’t entirely comfortable with who I was.” She later attended Swarthmore College in Pennsylvania where she was able to connect with like-minded people and graduated with a BA in philosophy. Asch began her job search after graduating but encountered difficulty being hired because she was blind. This struggle inspired Asch to advocate for disabled individuals who faced similar discrimination. Asch also became a voice for disabled women who, she argued, faced double discrimination - that of their sex as well as their inability to fit a physical ideal. She described this discrimination as a civil rights issue.

Asch then decided to return to academia to study social psychology and earned a PhD from Columbia University in 1992. Her doctoral dissertation focused on public policies and attitudes towards surrogate motherhood. During her time as a graduate student, Asch published Women with Disabilities: Essays in Psychology, Culture and Politics with social psychologist Michelle Fine. This work highlighted Asch’s growing interest in the intersection of feminism and disability rights by voicing the experiences of disabled women who faced discrimination. This intersection was a growing concern for Asch who stated the difficulties in joining them, “Disability is still not a category that is comfortable for lots of people within feminism, or anywhere else, to think about. As a political category, it’s all in this sort of category of misfortune rather than politics”.

After obtaining her PhD, Asch began working at the Boston University School of Social Work as an Associate Professor where she taught courses on ethics in social work practice. In 1994, she left the School of Social Work to become Professor of Biology, Ethics, and the Politics of Human Reproduction at Wellesley College. In 2003, Asch’s position at Wellesley College was extended to Professor of Women Studies. She was able to teach courses on reproductive rights, bioethics, abortion, ethics and social issues in genetics, women, motherhood and disabilities in society. She expressed her support for women’s right to abortion but she drew a clear distinction between abortions where women did not want any children and selective abortions where women wanted to avoid having children with disabilities. She advocated for a change toward a social model which would inform prospective parents about the potentials of life with disabilities.

Asch remained at Wellesley College until 2005 when she was offered the directorship of the Centre for Ethics and Professor of Bioethics at Yeshiva College. Her other teaching positions included Professor of Epidemiology and Population Health and Professor of Family and Social Medicine at the Albert Einstein College of Medicine, Yeshiva University. She continued teaching courses on bioethics and human rights and supervised doctoral, masters and honors thesis students. Asch continued to disseminate her research on disability rights through published articles and book chapters including Criticizing and Reforming Segregated Facilities for Persons With Disabilities, and a chapter on prenatal testing which was published in The Boston Women’s Health Collective’s classic book Our Bodies, Ourselves.

Throughout her career, Asch’s work was recognized through numerous awards and honors. In 1994, she received an award from The National Center on Educational Restructuring and Inclusion at the City University of New York. Her research on reproductive ethics was acknowledged by the Barbara Waxman Fiduccia Memorial Award for Scholarship in Reproductive Ethics and Disability, which was conferred in 2004 at the 2nd International Conference on Parents and Disabilities.

Adrienne Asch passed away in 2013 at the age of 67. Her role in bringing awareness to disability rights has changed how individuals with disabilities are viewed. In her own words, “It’s still considered a tragedy and a misfortune and something...It’s actually something...people with disabilities are either supposed to be very unhappy about or very proud of, and I’m neither unhappy nor proud. I just am.”