Cora Sutton was born in Minnesota on May 10th, 1880 to Stuart and Harriet Sutton. She earned her B.A. at University of Minnesota, and after graduating, she married H. Edward Castle, M.D., in 1910. Following a trip to Berlin, the Castles moved to California. Once there, Cora continued her studies by pursuing her M.A. at the University of California. Upon completion, Cora moved on to doctoral studies at Columbia University in New York City, where she studied under James McKeen Cattell and Robert S. Woodworth. Castle received her PhD in June of 1913, and her dissertation, A Statistical Study of Eminent Women, was published as a monograph in Archives of Psychology. A shortened version was also published the same year in Popular Science Monthly.

A Statistical Study of Eminent Women incorporated the biographies of 868 women. Using the methodology pioneered by Cattell, Castle examined the lives of these women through their respective encyclopaedia entries. Her analysis was thorough and detailed, and incorporated not only her research but also some comparisons to Cattell's earlier work (1903). In the end, Castle found that the women were represented in her analyses had become eminent due to external circumstances (e.g., by becoming queen, meeting a tragic fate, becoming a mistress) or because they excelled in typically feminine areas (e.g., literature, acting, music, motherhood). From this, she remarked that "The common concept of woman as a creature of feeling rather than a creature of reason may not be without foundation. If this conception is just, our classification tends to show that when woman has attained eminence, it has not been in spite of her femininity, but rather because of it" (Castle, 1913, p. 42).

The results of Castle's dissertation received considerable attention in newspapers such as the New York Times. In the ensuing decades, her work came to be considered "antifeminist" (Ogilvie & Harris, 2000, p. 236). This is, perhaps, not entirely surprising given the results that Castle published. However, a closer, more historically-informed analysis reveals more subtlety in her position. Castle reflected on her analyses, and concluded her dissertation by posing what could be thought of as a profoundly feminist question: "has innate inferiority been the reason for the small number of eminent women, or has civilization never yet allowed them an opportunity to develop their innate powers and possibilities?" (Castle, 1913, p. 90). Unfortunately, the analyses she chose to conduct did not allow her to answer this question. Yet, despite her failure to address the question, the fact that she asked it must be put in context: she was writing her dissertation before WWI, when these sorts of observations were only beginning to be made by others of this era, including Helen Thompson Woolley (1910) and Leta Stetter Hollingworth (1914, 1916). Moreover, when one considers that she wrote her dissertation (at least in part) under Cattell, this would be an especially progressive position given his unwillingness to engage questions of why women infrequently graced his own lists of eminent figures.

After the publication of her dissertation, the New York Times ran a special full-page article on her work, featuring an interview with Castle. In the interview she was able to clarify and elaborate on her position.

...I believe that the increase of eminent women in the past two centuries is due largely to the increase in opportunities for them to become eminent. There is, as is everywhere recognized, a wholly different attitude toward women to-day, and the reason that the number of women is less than a thousand is perhaps not so much because of innate inferiority to man as of the prohibitive attitude of civilization toward her. (New York Times, 1913, p. SM7)

There can be no doubt that Castle held distinctly pro-woman ideologies.

After graduating from Columbia, Castle moved back to California with her husband and settled in San Francisco. Upon her arrival she immediately joined the local women's clubs. In 1916, the San Francisco clubs amalgamated to produce one governing body, the City and County Federation of Women's Clubs. Castle acted as their second president, holding the office from 1918 to 1920. Her term as federation president was then followed up by a two-year term on the federation's yearbook committee.

As documented by records held by her family, Cora Sutton Castle and her husband lived at The Fairmont Hotel from the 1920s to the 1940s, where Edward was the hotel doctor. Cora was an avid traveller and documented the conditions affecting women around the world. She was one of the only women present at the opening session of The First Assembly of the League of Nations on September 3, 1923, and was sent to Belgrade as a reporter for the State Department in 1938. Other travels included trips to China, Egypt, and Japan.

The Castles never had any children. On March 29th, 1949, Edward Castle died of hypertensive cardiovascular disease. Cora remained in San Francisco until her death from cancer on August 14th, 1966. Her family describe her as an "anthropologist of women's issues." That is how she should be remembered.

Thanks to Sarah Hultgren for additional information. 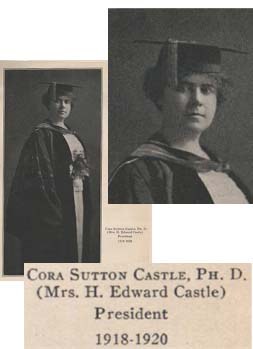