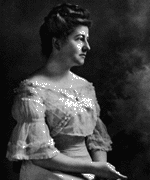 Institute for the Coordination of Women’s Interests, Smith College

Ethel Puffer was born into a family that encouraged the education of women; her mother, Ella, was a school teacher and had attended Smith, as did all of Ella's four daughters. Puffer, the eldest, showed great promise at Smith, and went on to teach mathematics there after graduating. In 1895 Puffer's interest in psychology took her to Germany, where Wundt's work had drawn many American students. Puffer found the conditions for female students to be worse in Germany than in America- for example, female students were required to get special permission from each of their professors before enrolling in their classes, which often meant tracking the professors down at their homes.

Puffer's fortunes changed when a fellow student introduced her to Hugo Münsterberg, who had just returned to Germany after three years teaching at Harvard. Münsterberg was impressed with Puffer and offered to supervise her research. Puffer had unprecedented access to Münsterberg: she worked regularly with him in his private laboratory, and was adopted into the Münsterberg family. Puffer set out to investigate beauty from a psychological perspective-a topic which had the advantage of uniting the ancient philosophical field of aesthetics with the new science of psychology. Münsterberg was not the only one impressed with Puffer: in 1897 the Association of Collegiate Alumnae awarded her a fellowship to pursue her doctoral dissertation on aesthetics, proclaiming "Miss Puffer gave very unusual promise of a scholarly career" (Scarborough & Furumoto, 1987, p. 80).

That same year, Münsterberg decided to return to Harvard. Puffer followed him, continuing to work under him while enrolled in Radcliffe College, Harvard's women's college. Although she soon completed the Ph.D. requirements, since she was a woman, instead of a diploma she received a certificate saying that she had completed work equivalent to a Harvard Ph.D. After three years, Ethel Puffer boldly wrote to the dean of Radcliffe asking if the school would confer a Ph.D. on the women who had previously completed their graduate coursework at Radcliffe, a list which included Mary Calkins. As a result of Puffer's actions, in 1902 four women - including Puffer and Calkins - were offered Radcliffe doctoral degrees.

In the decade following her graduation, Puffer worked at Radcliffe, Wellesley and Simmons College, and wrote ThePsychology of Beauty, a book based on her doctoral research. This professional productivity came to a halt when she married Benjamin Howes, a civil engineer whom she had met shortly after graduating from Smith. Even the news of her engagement was enough to cost Puffer her chance at a position at Barnard College. Although her husband was supportive of her work, social and domestic chores soon took over her life and she struggled to find time and energy for her scholarly pursuits. The birth of two children and several moves related to Ben's work did nothing to improve the situation, although she did find time to campaign for women's suffrage.

In 1922 Puffer published two articles in the Atlantic Monthly discussing what she saw as the sad failure of the idea that women could successfully combine marriage and a career. She believed that professional women were being misled about what they could expect if they married. It was not simply the problems of discrimination, Puffer wrote, but the interminable toil and distractions inherent in housekeeping and mothering. She was pessimistic about the potential of servants and labor-saving devices and vehemently rejected the home use theory-the idea that a woman could sufficiently exercise her talents by running her home. Although she worried that either work or children would be neglected, Puffer proposed that women modify their career plans by choosing professional work that allowed them flexibility. The goal was for women to achieve continuity throughout their lives, not the professional dead end that Puffer had experienced.

As a result of these articles Puffer was appointed the director of the Institute for the Coordination of Women's Interests at Smith College, an institute created by a Rockefeller grant. As director, Puffer experienced the difficulties of combining career and family first-hand, as Smith was quite a distance from her home near New York City. She resolved the long commute by spending half the week living at Smith, and half living at home caring for her family. Despite her exhausting schedule, under Puffer the Institute was productive, surveying Smith alumnae who had successfully integrated home and professional concerns, developing a cooperative nursery school and a food service which delivered ready-made hot meals.

However, after three years, the Rockefeller grant was not renewed and only the nursery school survived by being integrated into Smith. It seemed that the Institute's work had been too applied for both those running the Rockefeller Foundation, who had expected more theory, and for Smith faculty, who were protective of Smith's liberal arts emphasis. Discouraged by this turn of events, Puffer turned to other, nonacademic, pursuits, her life having been a perfect exemplar of the very "intolerable choice" against which she had railed.

Stephenson, C. T. (1992). "Integrating the Carol Kennicotts": Ethel Puffer Howes and the Institute for the Coordination of Women's Interests. Journal of Women's History, 4, 89-113.