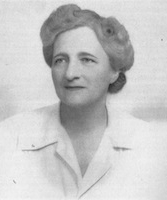 Knapp Foundation of College of Physicians and Surgeons, Columbia University (1943-1957)

(Marie) Gertrude Rand was born on October 29, 1886 in Brooklyn, New York to Mary Catherine (Moench) and Lyman Fiske Rand. Her father was the president of a manufacturing company and she was the third oldest of several children. Rand attended the Educated Girls High School in Brooklyn until 1904. In 1908 she received her B.A. in experimental psychology from Cornell University in Ithaca, New York, and in 1911 she received her M.A. and Ph.D. in psychology from Bryn Mawr College (a women’s college) in Pennsylvania under the supervision of Clarence E. Ferree. Her dissertation was titled “The factors that influence the sensitivity of the retina to color: A quantitative study and methods of standardizing.” Bryn Mawr was one of the few women's colleges at the time that would hire unmarried men. Rand married Ferree in 1918, keeping her maiden name, and they continued researching and publishing together until his death in 1943. Although Rand has many publications of her own, she also co-published extensively with Ferree and others.

After receiving her doctoral degree, Rand remained at Bryn Mawr College teaching and publishing for well over a decade. In the year following her Ph.D. Rand was a post-doctoral fellow, and the next year she was appointed a Sarah Berliner Research and Lecture Fellow from the Associate of Collegiate Alumni, which was later to become the American Association of University Women. The Sarah Berliner Fellowship had been established due to the efforts of Christine Ladd-Franklin with an endowment from Emile Berliner, the wealthy inventor of the phonograph. Ladd-Franklin intended the fellowship to allow women to continue to do research and remain in academia at a time when faculty positions for women were few. From 1913 until 1927 Rand was appointed an associate of Bryn Mawr, and during her time there she was a respected professor and researcher. Together Rand and Ferree co-published several articles on the effects of lighting on colour vision. Rand’s research involved mapping the retina for its perceptual abilities including light sensitivity and colour discrimination. The map of the retina became known as the Ferree-Rand perimeter, and it enabled the diagnosis of visual dysfunctions. While at Bryn Mawr, from 1924 to 1927, Rand served on the National Research Council’s committee on industrial lighting.

In 1928 Rand took a position at Wilmer Ophthalmological Institute of Johns Hopkins School of Medicine in Baltimore, Maryland. Ferree took a position there as well and they continued their working partnership, conducting a vision research laboratory and collaborating on research. At Johns Hopkins, Rand was first appointed as an associate professor of research ophthalmology from 1928 to 1932, and became an associate professor of physiological optics from 1932 to 1936. She was then the associate director of the Research Laboratory for Physiological Optics from 1936 to 1942. While at Johns Hopkins, Rand worked on a number of projects, many of which involved industrial lighting. One of her most notable projects was her work on designing glare-free illumination for the Holland Tunnel that ran under the Hudson River, connecting New York and New Jersey. She also contributed to World War II efforts by developing vision standards and testing for pilots and ship lookouts, including night vision technology. Along with these projects, Rand also patented over a dozen other lighting devices and optical instruments. Rand left Johns Hopkins in 1943, the same year as the death of Ferree.

Rand then moved to New York City to become a research associate at Columbia University’s Knapp Foundation of the College of Physicians and Surgeons from 1943 until her retirement in 1957. During this time in her career, Rand, in collaboration with Legrand Hardy and M. Catherine Rittler, researched the detection and assessment of colour blindness and developed the HRR pseudo-isochromatic colour test which is still used in ophthalmology today. Their work enabled the qualitative identification of colour blindness along with the type and degree of colour blindness in different subjects.

The Illuminating Society of North America named Rand the first female fellow in 1952, and in 1963, she was awarded the Society’s gold medal for her work on lighting and vision. Rand was also the first woman to be awarded the Optical Society of America’s Edgar D. Tillyer Medal in 1959 for outstanding research in vision. In 1971, Rand’s student, Louise Sloan, was the second woman to receive the Tillyer medal. Rand was a member of the American Psychological Association and the American Association for the Advancement of Science. She published and co-published over one hundred papers in her career.

Ferree, C. E., & Rand, G. (1917). The selectiveness of the eye's achromatic response to wave-length and its change with change of intensity of light. Studies in psychology contributed by colleagues and former students of Edward Bradford Titchener (pp. 280-307). Worcester, MA: Louis N. Wilson.

Ferree, C. E., & Rand, G. (1939). Testing fitness for night flying: Speed of change of adjustment of the eyes for intensity of light and distance of object. American Journal of Ophthalmology, 22, 655-661.

Rand, G. (1913). The factors that influence the sensitivity of the retina to color: A quantitative study and methods of standardizing. The Psychological Monographs, 15(1), 1-166.