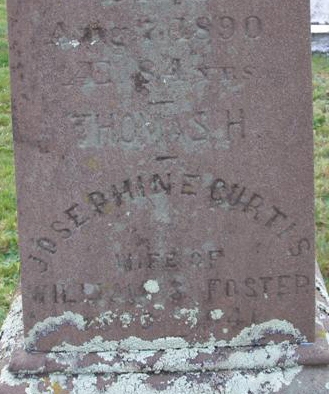 Josephine (Nash) Curtis Foster was born 6 April, 1889 in Cambridge, Massachusetts. She completed both her undergraduate and master’s degrees at Wellesley College in 1910 and 1912, respectively. After her time at Wellesley, Foster worked as an instructor in education, mathematics, and psychology at Smith College in the 1912-1913 academic year. She then enrolled at Cornell University in Ithaca, New York where she worked with psychologist Edward Bradford Titchener. At Cornell, Foster also conducted research on skimming in reading with Guy Whipple in the Educational Laboratory. She completed her doctorate in 1915.

In some of her earliest published work, Foster engaged with Mary Whiton Calkins’s self psychology and used these ideas to criticize many of Calkins’s self-psychology’s central tenets. Other early research included work on the temporal judgment, memorization, and susceptibility to the Müller-Lyer Illusion. Following the completion of her graduate degree, Foster returned to Massachusetts where she worked as Assistant Psychologist at the Boston Psychopathic Hospital. She was promoted to the hospital’s Chief Psychologist in 1918. In the early 1920s she worked with Robert Yerkes on the 1923 revision of A point scale for measuring mental ability, originally published in 1915.

Foster married another former student of Titchener’s, psychologist William Silliman Foster, in the summer of 1918. The newly married couple moved from Boston to Minneapolis, Minnesota. Silliman Foster was hired as a professor in the Department of Psychology at the University of Minnesota. In the 1922-1923 academic year, Foster was hired as an assistant in the department. She did not obtain a permanent position at the university until 1926 when, following the death of her husband, she joined the Institute of Child Welfare. In 1928 Foster was promoted from Assistant to Associate Professor at the Institute. She also served as the Institute’s kindergarten and nursery school principal. In 1929, along with some of her colleagues, she served as a member of the subsection on “The Infant and the School Child” as part of President Hoover’s White House Conference on child health and protection.

From the late 1920s Foster worked on a variety of projects related to the education and psychological development of young children. Continuing her earlier testing work, Foster developed the Minnesota Preschool Scale with her colleague Florence Goodenough. She also undertook research on “Factors affecting the amount of teacher's time taken by nursery school children,” “School records of illness at various ages,” and “Play activities of children in the first six grades.” Foster was also actively involved in the Minnesota Educational Association and served on the executive board of the National Association for Nursery Education.