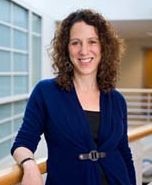 Lisa Goodman jokes that she may have been nursed on feminism, as her mother was an active feminist. She grew up in a household with two working parents who were involved in many political issues, including civil rights activism. The possibility of a "feminist psychologist" identity did not emerge until college, however, despite the fact that her mother was also a psychologist. At Wesleyan University, Goodman was taught by Jill Morawski, a feminist social psychologist, and fell in love with Morawski's intellectual contributions, her personality, and her respect for her students.

Early in Goodman's education she developed an interest in social and political trends, how these trends shape psychological thought, and vice versa. She wanted the work she did in her professional career to have an impact on social change, and she struggled to determine whether it was best to do this through policy change or individual interventions. Upon graduating from Wesleyan University with a Bachelor of Arts degree, Goodman began working on a policy project for International Physicians for the Prevention of Nuclear War. While working for this organization she realized just how difficult it could be to bring about any real change in social policies. This led her to begin working on a more personal basis with individuals suffering from schizophrenia. Despite being uncomfortable with the harm she felt the mental health system brought about, this proved to be a very rewarding endeavor. Goodman enjoyed having a direct relationship with individuals and tracking their progress throughout the intervention process.

Goodman returned to school for a clinical-community graduate program at Boston University. She became mildly frustrated with the fact that the program focused more on clinical psychology and less on community psychology. She always tells her students that she "was that graduate student who couldn't find a place; the frustrated acting up supervisee, who everyone thought was angry, angry, angry." In hindsight she understands that she was not angry, but rather, trying to develop an alternative theoretical framework that was more meaningful to her than the one she was being taught in her classes.

In identifying which topic to pursue for her dissertation, Goodman drew upon her previous work in homeless shelters with women who experienced domestic violence. This inspired her to study the relationship between homelessness and domestic violence. Goodman connected herself with supportive faculty members throughout her graduate years, including Len Saxe, who played an instrumental role in her work. He pushed her to write various grants and to gain confidence in her abilities.

After earning her PhD, Goodman moved to Washington, DC to work as a public policy fellow for the American Psychological Association. This experience proved to be very rewarding, as she was able to work on policies related to violence against women. During this fellowship she met some important feminist psychologists who would later help to shape her career. Together, Goodman, along with Mary Koss, Angela Browne, Louise Fitzgerald, Gwendolyn Keita, and Nancy Felipe Russo, co-authored the book No safe haven: Violence against women at home, at work, and in the community.

Goodman then decided to apply for a position in the clinical-community program at the University of Maryland. Although she felt she was underqualified for the job, three weeks after giving birth to her first son, Goodman received a phone call asking her to come for an interview. Of course she said yes, but as she states, "I was nursing! I was a mess, a mess!" Fortunately, a woman from Maryland called her and said, "I heard you just had a baby. I heard you are nursing and you must be freaking out." The woman offered to have her babysitter come to the department and take care of Goodman's new baby. She also arranged for breaks throughout the presentation so Goodman could nurse her son. Goodman remembers not wearing the right clothing, and being tired and awkward in front of the 8 men and 1 woman of the clinical-community program. However, she thought, "the hell with it, this is me."

Just being herself paid off! Goodman was offered the job and worked in the department for five years. While at the University of Maryland, she gave birth to her second child, and was making plans to have her third. Several people suggested not having another child if she was considering being a "serious scholar." Goodman dismissed this advice, as she believes in living life according to the things that are important to oneself. Her philosophy has proven successful, as she has been able to lead a fulfilling personal life while building a meaningful career.

Goodman credits her scholarly success to the balance she has been able to strike between family and career. An important aspect of her career building has been her ability to collaborate with various colleagues, allowing her to remain productive and not overworked. Goodman admits that in the early days, "I took lots of shortcuts as a parent and as an academic, and I didn't spend as much time with my kids as I theoretically wish I had...I remember my friends would say, 'by seven o'clock aren't you ready to kill your kids?' I saw them first at 6:15 so I did have that distinct advantage of always feeling so excited to be with my children."

Goodman earned tenure at Boston College in the counseling department while raising her young family. She had heard about the position from a friend, and when asked if she would apply for the job, Goodman replied that she thought counseling was for "well-adjusted, happy people interested in studying well-adjusted happy people and the clinical world was for all the dark neurotic types interested in pathology." Her friend responded, "No, they're really screwed up here too!" Counseling psychology proved to be a great department for Goodman as it strongly supported her social justice work.

At Boston College, Goodman has been able to expand and diversify the research methods she uses and has developed close relationships with amazing students. This experience has taught Goodman a lot and has increased her confidence in using qualitative approaches. She is currently working through the many questions about how to best collaborate with community members in participatory action research. Her research continues to focus on violence from a perspective that incorporates the entire social context.

Offering advice to students who are interested in feminist psychology, Goodman recommends finding a good mentor, "Someone who's really interested in what's best for you and your values." She also recommends being brave and knowing that you come first, recalling all of the students who are afraid "to speak the truth to people who have more power at senior levels...So pick your mentors carefully and then take the risk to be honest about seeking support or help." Most importantly, Goodman says "collaborate, collaborate, collaborate!"