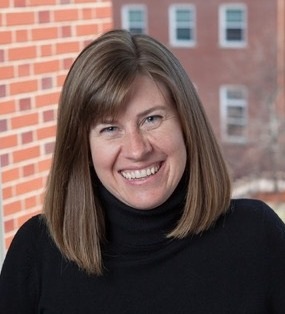 Centre for Interdisciplinary Research on Narrative

Michelle Lafrance was born and raised an only child in Sault Ste. Marie, Ontario, Canada to very supportive parents. Lafrance especially highlights the fierce support from her mother, explaining that although she would not necessarily have referred to herself as a feminist, her mother was “raised on Gloria Steinem.”

Lafrance attended St. Francis Xavier University in Antigonish, Nova Scotia. She started her undergraduate studies with an interest in chemistry but quickly became more fascinated by psychology. She was introduced to feminism in her third year when she took Introduction to Sociology with Anne-Louise Brookes. These initial steps into the world of critical feminism, “just really cracked me open and all of a sudden, everything made sense… once [people] are introduced to feminism that’s the lens that you can’t ever take off. It just made everything so clear and just made everything so new for me and that was really the start of it.”

Lafrance found encouragement for combining her interests in psychology and feminism at St. FX, with professors who supported her desire to undertake interdisciplinary projects. She completed her honours thesis on the relationships among menarche, body image, self esteem, and eating attitudes in college women with professor Ann Bigelow: “[Ann] gave me all kinds of direction in terms of reading in feminist scholarship, so I was learning about psychology at the same time that I was learning about feminism, so I just didn’t really have a lot of time to learn about psychology in the absence of learning about feminism, so it was perfect for me.”

Lafrance credits Bigelow’s mentorship as the impetus for applying to graduate school, although she adds that she also wanted to “join the conversation.… I wanted to know what was out there, what was being said, what had been worked out, where did I fit, what did I agree with, what did I not agree with?”

After completing her MA, Lafrance took a year off from her studies to simply read as much as she could about feminist scholarship in Canada, and to reflect on what path seemed most appropriate for her. During this time, she encountered Janet Stoppard’s research on women and depression at the University of New Brunswick. Lafrance applied to their doctoral program, was accepted, and Stoppard became her supervisor. As she recalls, “…being accepted to work with her that was a really, really nurturing intellectual experience. I loved doing my PhD and it was fun.” Lafrance earned a PhD in clinical psychology. In her dissertation she examined women’s experiences of recovery from depression. For Lafrance, working with Stoppard was a “rich and nourishing intellectual experience…She was, she is, a powerful force. .... She had very high expectations... So you had to be on your toes, but that’s why I was there, so we actually had a fantastic relationship that grew into a friendship…”

Working with Stoppard led Lafrance to discourse analysis - a method that has allowed her to most meaningfully explore the particular questions that have interested her. Lafrance was particularly attracted to Margaret Wetherell’s approach, which combines Foucauldian analysis with conversational analysis – this mix of styles has been central to her work and has allowed her to achieve a deeper exploration, to simultaneously unpack and deconstruct, and to also engage in multiple layers of analysis – all while respecting the validity of the individual’s narrative.

Lafrance has spent much of her career challenging the medical model of psychology, particularly as it relates to women’s experiences with depression and recovery. Her interest in women’s experiences and “talking back” has made her “very excited about resistance and how we resist dominant discourses in our lives in a variety of different ways.” Specifically, she is intrigued by how dominant discourses “shape our subjectivities and our experiences, but also the room for resistance.” Ultimately, Lafrance wants to examine, “how can we push back?” In 2014, she and St. Thomas University colleague Sue McKenzie-Mohr co-edited a volume entitled Women Voicing Resistance: Discursive and Narrative Explorations, which won the Distinguished Publication Award from the Association for Women in Psychology.

In addition to her own research, Lafrance is involved in a number of other initiatives. She is the founder of the Centre for Interdisciplinary Research on Narrative (CIRN), which focuses on narrative methods in research and encourages its use. She is also an executive committee member of the International Society for Critical Health Psychology (ISCHP). “…the forefront of [the ISCHP’S] work is critical psychology, and that’s been really synonymous with feminist psychology in my experience and most of them are doing discourse analysis or some iteration of that.” Lafrance is also a consulting editor for the journal Feminism and Psychology. Of the journal, she notes:

"[T]he standards are very, very high, but it’s very supportive and I’ve never seen a review come through that wasn’t supportive. It can be extensive and even rejecting, but supportive..."

And on the importance of cultivating a feminist alliance while allowing for diversity of viewpoints, she remarks:

"I think we’re all in this together…I think we need to hook elbows together, we have a lot of work to do as feminist scholars from all different epistemological and methodological alignments, and I think it’s just a waste of our energies to squabble based on those kinds of things."

Lafrance has been a professor at St. Thomas University in New Brunswick since 2003 and has received two teaching awards, the Dr. John McKendy Memorial Award for Excellence in Teaching in 2013 and the Dr. Sheila Andrew Award for Excellence in Teaching in 2006. Lafrance considers St. Thomas to be both a feminist and supportive environment; moreover, she is able to teach her undergraduate classes from a feminist perspective, and provides mentorship to her undergraduate honours students, as well.

Lafrance advises current and future feminist scholars: “It’s essential to find your people! It’s been pivotal for me…” Lafrance’s tireless passion for understanding women’s experiences and the importance of resistance has inspired another generation of feminist scholars to push back against dominant discourses, enriching both feminism and psychology in the process.