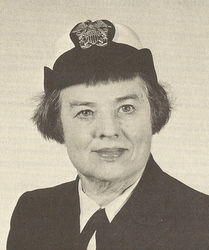 Mildred B. Mitchell was born on December 25, 1903, in Rockford, Illinois. She grew up among recent Swedish immigrant families while belonging to a family with a long lineage in the United States. In 1920, at the age of sixteen, Mitchell entered Rockford College. As a requirement for a teaching certificate Mitchell took a course in general psychology, taught by Dr. Benjamin Van Riper. Mitchell enjoyed Dr. Riper's course so much that she enrolled in his abnormal psychology course in her second semester. One of the readings for the course was Morton Prince's A Dissociation of a Personality which particularly fascinated Mitchell. Her professor was of the opinion that philosophy and mathematics were the most difficult subjects and that men were much more successful in them than women. Undaunted, Mitchell took a lot of philosophy and mathematics during her collage career. Mitchell graduated from Rockford Collage receiving a B.A. degree with a major in mathematics and a minor in philosophy, speech, and education.

Mitchell began her studies at Harvard in the summer of 1926 and soon decided to stay in order to get her master's in psychology. At Harvard, although she did encounter some encouragement from Morton Prince and Frederic L. Wells, Mitchell came across deeply rooted sex discrimination. She was forced to register at Radcliffe College despite the fact that all of her classes were taken at Harvard because women were not allowed to officially enroll as Harvard students. Moreover, the department and Widener libraries were closed to women in the evenings. One of Mitchell's professors, Edwin Boring, seemed to delight in creating barriers for female students. For instance, Boring did not allow Mitchell a key to the psychology laboratory iso that she could work in the evenings, and refused her access to the psychology colloquia on the basis of her sex. Finally, by disparaging Mary Whiton Calkins' refusal to accept a Radcliffe Ph.D. for doctorate work completed at Harvard, Edwin Boring provided Mitchell with a reason to leave Harvard after she completed her M.A.

Mitchell entered Yale University to continue her graduate studies. There she was given a private office, keys to the libraries, and was welcome to participate in the department colloquia. Moreover, Mitchell found Clark Hull to be a helpful adviser for her hypnosis research. Even though her experience at Yale was more positive, Mitchell went on to hold a succession of low-paying, low-status jobs in mental clinics and hospitals. This type of education and career experience was not unusual for female psychologists in the 1920s and 1930s.

In 1931, Mitchell received her Ph.D. from Yale and delivered her first paper at the APA. Mitchell's dissertation was based on the types of errors participants made when memorizing lists of three-digit numbers because the practice of hypnosis was banned at Yale by that time. In 1938, when she returned form a trip around the globe, one of her previous professors from Harvard, Walter Samuel Hunter, recommended her for a job as a psychometrist at the Psychopathic Hospital at the State University of Iowa. Mitchell was deeply involved in applied research and trained senior medical and graduate psychology students while also working with patients in the clinic and hospital there. Mitchell's name was presented to the APA by Hunter for fellow status on the basis of six research articles she had published, three of which appeared in the American Journal of Psychology. Mitchell became one of the first fellows in the APA despite her great involvement in applied psychology, then considered less prestigious.

Mitchell was proud to be an American and, due to her patriotic background, in 1942 she took an examination to join the first women's auxiliary in the army. However, even though she passed the exam she was not called up right away. As a result, Mitchell joined the Navy and, in less than a year, became Lieutenant in the Bureau of Naval Personnel. Mitchell was delighted with the Lieutenant commission even though she had learned that men who were students with her at Harvard and Yale were commissioned as Lieutenant Commanders. Mitchell met an Army Lieutenant, Ira Spear, at a dance in Washington. Spear courted Mitchell for a while before Mitchell declared that she was taking a job at the Veterans Administration (V.A.) Mental Hygiene Clinic at Ft. Snelling in Minnesota. Knowing that Mitchell was too independent to refuse a job that tripled her current salary, Spear quit his job to join her in Minnesota. In 1947, six weeks after Mitchell became the first Chief Clinical Psychologist at Ft. Snelling, she and Spear got married.

Mitchell changed jobs frequently because as a woman she often found herself in dead-end jobs or in places where men who were less qualified than she were recruited for the more prestigious positions. As a result, Mitchell could not resist new opportunities that offered more challenges. Specifically, in 1936 she established a vocational department in the U.S. Employment Service in New Hampshire, where she worked as vocational director and counselor. She opened psychology departments in two state hospitals in Iowa in 1939; in the U.S. Naval Hospital in Bethesda, Maryland in 1943; and in the Veterans Administration Mental Hygiene Clinic in Ft. Snelling, Minnesota in 1947. When Mitchell came to Ft. Snelling she was given a civil service grade rarely given to women because they lacked male applicants. There Mitchell was never promoted to a grade higher than her male colleagues, even though she was doing the work of three male psychologists who had fewer trainees.

After serving over ten years at Ft. Snelling and the V.A. center in Dayton, Ohio, Mitchell left for a position as a clinical psychologist at the Stress and Fatigue Section of the Biophysics Branch. Mitchell was deeply involved in research on Time Estimation and Disorientation in Isolation which was interrupted by the astronaut selection program. In February and March, 1959, Mitchell worked long hours, six days per week with the thirty-one astronaut candidates out of whom seven had to be selected. Although all candidates came highly recommended by their services, Mitchell and her colleagues were particularly interested in their emotional adjustment and their ability to work under severe stress. Mitchell's first promotion in fourteen years came when it became known that she was involved in the astronaut program and she was promoted to Lieutenant Commander. When the astronaut records were de-classified many years later, Mitchell was frequently asked to give talks and public lectures about her work on the program, which she did enthusiastically.

In 1962, Mitchell met a Colonel who was chief of the Electronic Technology Laboratory and was interested in forming a bionics branch there. Bionics is the study of how to transfer models of organic, biological functioning to inorganic matter (engineered systems). When he learned of Mitchell's multiple qualifications, he spoke to his superior and was told that if he could get Mitchell on the team he had permission to open a bionics branch. Mitchell became the first person to be officially assigned to bionics. Before retiring, Mitchell spent five years monitoring Air Force contracts in bionics across the country.

Through personal contacts, Mitchell acquired a position as a fulltime associate professor of psychology at the University of Tampa for two years. Then she became a part-time lecturer in South Florida for three years. Later, until 1977, Mitchell did part-time consulting and occasionally took a private patient. This gave her an opportunity to continue to travel the globe, lecture, and pursue dramatics and swimming. In 1982, Mitchell was still active in many organizations, often serving on boards, including the Reserve Officers Association, the Retired Officers Association, the American Association of University Women, and the local Harvard and Yale clubs. In 1983, Mildred B. Mitchell passed away, leaving a record of her very active and productive life in the form of countless achievements and publications.

By Mildred B. Mitchell

Mitchell, M. B. (1934). Anticipatory place-skipping tendencies in the memorization of numbers. American Journal of Psychology, 46, 80-91.

Mitchell, M. B., & Tinklepaugh, O.L. (1939). Monthly and weekly weight cycles in women and their relations to behavioral and physiological functions. Journal of Educational Research, 34,516-21.

About Mildred B. Mitchell