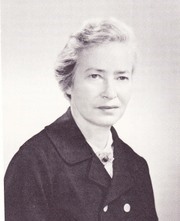 Thelma Gorfinkle was born to a Jewish family in Chelsea, Massachusetts in 1908. She was born to a very achievement-oriented but not an education-oriented Jewish family. Her parents were not as influential or supportive as her older sister, Bertha, who encouraged her to the college track in high school. Bertha herself went into business.

In her junior year of high school, Gorfinkle was informed by her high school principal that because of her good academic record, she was exempt from taking the College Entrance Examination. This privilege inspired her to enroll at Wellesley College in 1925 at the age of seventeen. In her first year, she felt very lonely and disliked Wellesley intensely. However, Bertha insisted that she stay in college. In her following years, her negative feelings towards the college diminished. Continuing her four years of German in high school, she took more literature courses and majored in German. She graduated with General Honors in 1929. However, she was not interested in teaching German and she rejected all of the job offers which were offered to her during her college years. The same year Bertha died and Gorfinkle was needed at home.

The first time Gorfinkle was introduced to psychology was in her sophomore year at Wellesley. She took introductory psychology with Eleanor Acheson McGullough Gamble as a course requirement. She found the instructor very inspiring; however, the subject matter did not appeal to her for she found it to be dull and unchallenging. In her last year, she was offered the job of Miss Gamble's assistant and she accepted without hesitation. Through this opportunity, she could live at home and assist in the care of her sister's son; at the same time she could begin graduate work at Wellesley.

In April of 1932, Thelma married Abraham T. Alper and the next year she earned her Master's . Miss Gamble died in the summer of 1932 and Thelma Alper lost her main support in the department. Throughout the hard times, her husband's support was invaluable to her. Meanwhile Alper was involved in clinical work in the Judge Baker Guidance Center in Boston, where she learned how to administer and score the Binet test. She joined the staff there on a part-time basis twenty years later.

Four years after completing her M.A., Alper took courses in advanced statistics, remedial reading and test construction from the Harvard Graduate School of Education. She devised The Wellesley Spelling Scale together with her colleague, Mrs. Edith Mallory. She became the assistant in psychology and director of remedial reading in the English Department at Wellesley. Her first publication, If Only I Could Read Faster, was based on the remedial program she was developing and was published in the Wellesley Magazine in the late 1930s.

She decided to move on from the School of Education and to get her Ph.D. in Psychology. She had an interview with Dr. Edwin G. Boring, the chairman of the psychology department at Harvard. In 1939 Harvard did not favor female students and only a few were admitted. At the end of a three-hour interview, Dr. Boring accepted Alper as a part-time student. Despite the difficulties that she faced as a woman, she managed to pass the qualifying examinations and became the eleventh woman to be granted a Ph.D. from Harvard in 1943.

During her studies at Harvard, Alper became interested in the role played by memory for completed tasks and uncompleted tasks after listening to Kurt Lewin's lecture. Influenced by Kurt Lewin's tension theory, she wrote her dissertation on how Lewin's theories contradicted Saul Rosenzweig's finding that completed tasks are better remembered than uncompleted tasks, a phenomenon originally documented by Bluma Zeigarnik and popularly known as the Zeigarnik effect. Later, she became interested in the area of achievement motivation in college women and men's perceptions of women's aspirations. She developed a role-orientation measure, the Wellesley Role-Orientation Scale, which measures the tendency for women to favor a non-achievement-oriented role, a role that the dominant culture designates.

In 1942 she resigned from Wellesley and applied for a position as "Psychology Tutor" at Radcliffe. After she received her Ph.D. the next year, she was promoted to be an instructor of psychology at Harvard. During the war years, there were fewer men available in the non-war-related positions and it was easier for women to be promoted in academia. She remained as the only woman in the department until 1946. In her first years as an instructor at Harvard, she worked closely with Edwin Boring as he gathered material for two books: Psychology for the Fighting Man and Psychology for the Returning Veteran.

In those years, when Radcliffe and Harvard were independent institutions, the status of women at Harvard was low and women were often subjected to discrimination. For instance, female classes and male classes were held in different buildings, and students were segregated while taking their final examinations. Reflecting on the situation, Alper stated

"At Harvard a male instructor was responsible for handing out the exam questions to the male graduate students. After doing so, the instructor's next task was to go to Radcliffe to hand out the exam papers to female students who were enrolled in that same course. Having been carefully informed by Dr. Boring the first time I was scheduled to give a final, I dutifully appeared in Emerson D (a lecture hall in Harvard) prepared to hand my experimental psychology questions over to the male proctor, but he would not permit me to enter the room. He kept on saying that I must go to Radcliffe, and I kept on saying that I knew and I would go there next. Finally, sensing that the real problem must be my sex, I gave up. No matter that the students were deprived of ten minutes of working time; the segregation of the sexes had been preserved" (Alper, in O'Connell & Russo, 1983, p. 193).

Alper was strong and rebellious enough to persuade the all-male faculty to accept a female faculty member teaching a course on child psychology. Having a married female member in the faculty was so unusual that the invitation to the president's annual reception to the new faculty members was pointedly addressed to "Mr. and Dr. Thelma G. Alper".

In 1946, Dr. Eugenia Hanfmann was accepted to the department, and Alper and Hanfmann provided mutual support. Eventually, both women resigned from Harvard because they were aware that women would not be offered tenure there. The discrimination against women in academia was not limited to Harvard. Alper was offered an interview from both Boston and Tufts University when she was teaching at Harvard. However, both places made it clear that they would not offer tenure to a woman. In 1948, Alper joined the psychology department at Clark University, again being the only woman on the faculty. However, she left there as well when she was offered an associate professorship and a guarantee of tenure from Wellesley College in 1952. While teaching at Wellesley, she introduced one of the first courses in the United States on the psychology of women. By 1954, she became a full professor and stayed at Wellesley until her retirement in 1973. She also served as the chairwoman of Wellesley College's psychology department.

In 1959, during her sabbatical semester, she worked with Dr. Bessie Sperry at the Judge Baker Guidance Center. They cooperated on several projects; one of them was serving as consultants to a Head-Start set-up in Charleston, Massachusetts for five years. Meanwhile, she continued her clinical research and trained herself in therapy. After her retirement, she maintained a small private practice working with adult patients. Thelma Alper died of a stroke at Sherrill House nursing home in Roxbury, Boston at the age of 80.

Thelma Alper was a pioneer in research on the psychology of women and on learning problems of children. She also deserves to be recognized as the woman who helped force the traditional, all-male faculty to accept female professors at Harvard.

Alper, T. G. (1952). The interrupted task method in studies of selective recall: a reevaluation of some recent experiments. Psychological Review, 59(1), 71-88.