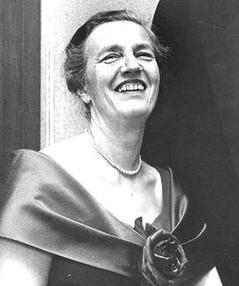 Katharine Elizabeth McBride was born on May 14, 1904 in Philadelphia, Pennsylvania. She was the daughter of Thomas Canning, a mechanical engineer, and Sally Hully Neals McBride. McBride attended Germantown Friends School and then pursued her post-secondary education at Bryn Mawr College in Pennsylvania. She completed her B.A. at Bryn Mawr College and also earned her M.A. there while working as a part-time psychology instructor. McBride decided to study neurology at Columbia University for one year and then returned to Bryn Mawr in 1929 to complete her PhD.

McBride’s dissertation was on disturbances in language and thinking and she collected data from patients in surrounding Philadelphia-area hospitals. During this time, she also lectured in psychology and successfully completed her Ph.D. in 1932. After finishing her degree, a well-known neurologist named Theodore Weisenburg invited McBride to join him in a study of the assessment and empirical classification of aphasia. Weisenburg and McBride procured a control group of healthy individuals along with the aphasic samples, and matched them on education, age, and occupational background. The fact that they matched the control group with the aphasic group was a significant development in the history of aphasia research because the two groups were as closely comparable as possible, thus minimizing confounds. Their method of assessment included a variety of verbal and nonverbal tests. At the end of their study, they were able to identify key psychological differences and establish an easy classification of aphasia including expressive, receptive, expressive-receptive, and amnesic types of disorders.

The results of their study were reported in a 1935 book that they co-wrote called Aphasia: A Clinical and Psychological Study. This book was specifically about aphasia in relation to standardized psychological testing and clinical neurological examination. In addition, McBride co-authored a 1936 book Adult Intelligence with Weisenburg and Dr. Anne Roe. This was a turning point in McBride’s life that positioned her as one of the most promising emerging neuropsychologists of the time. The book detailed information about McBride’s and Weisenburg’s measures of aphasia including several different writing, reading, mathematics, and language comprehension tasks. However, after the death of Weisenburg, McBride turned her focus to her administrative career in higher education instead of aphasia research. She was promoted to Assistant Professor in Education and then Associate Professor in Psychology at Bryn Mawr College. After a few years, she left Bryn Mawr and took a position as Dean at Radcliffe College in Cambridge, Massachusetts.

At the age of 38, McBride returned to Bryn Mawr as President. She made a record for being the youngest college president in the United States. McBride was a popular figure in the Bryn Mawr College community and she was often seen on the school campus engaged in conversation with students. That popularity was not universal though as Dr. Magda Arnold, then Acting Head of the Psychology Deptartment, reportadly struggled with McBride's psychoanalytical orientation and reserved personality. As President of Bryn Mawr, McBride made important changes to the school’s organization. She increased graduate school enrollment from 133 to more than 600. She also established a separate Social Work school, founded a laboratory nursery school, and established the Child Study Institute at Bryn Mawr.

During World War II, the United States government demanded that Deans take on the role of educators who could prepare students for the modern world. In McBride’s opinion, the Dean was an important educator without a particular speciality in a subject. In order to meet the government’s requirement, McBride added technical and professional courses such as mathematics, science, and foreign languages, which would be important in reshaping society post-war. In addition, she was an advocate for higher education and was against the idea that women should only focus on preparing for marriage and family life. McBride strongly believed that women should be able to study alongside men and there should not be a separate curriculum for women. Furthermore, she noted that specialization was a crucial part of education because many jobs are dependent on highly concentrated training and qualifications.

McBride actively participated in a number of educational organizations such as the College Examination Board (1949-1952), the Educational Testing Service (1947-1964), and the American Council on Education (1955-1956). In 1952, McBride was the first woman trustee of the University of Pennsylvania. She received more than 20 awards for her contributions to women’s education from organizations such as the National Science Foundation, the Carnegie Foundation for the Advancement of Teaching, the American Psychological Association, and the American Association of University Women.

After her retirement in 1970, McBride remained involved in national organizations such as the American Psychological Association and American Association of University Women. In 1971, she delivered a speech on “Higher Education and the Pace of Change” at the prestigious Horace Mann Lecture series She taught “Social Foundations of Education” at Bryn Mawr College and was involved with local clinics on cases of speech disturbance in children. McBride died in 1976 at the age of 72 due to a heart ailment at Bryn Mawr hospital. McBride’s work and legacy remains prominent in the field of higher education leadership, as well as research and clinical psychology.