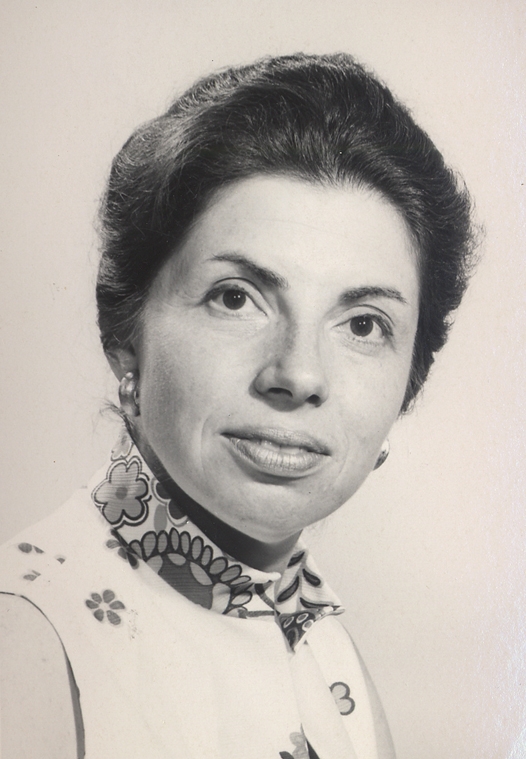 Marcia Guttentag was born November 9, 1932 in New York. A renowned social psychologist, researcher, and social activist, Guttentag was at the height of an incredible academic career when she passed away unexpectedly 5 days before her 45th birthday on November 4, 1977.

Guttentag’s scholarly trajectory began in 1953 at the University of Michigan, where she received a B.A. degree in Psychology. She was also named the M. Robinson Hawkins Scholar to recognize high academic achievement during her undergraduate career. Shortly after graduation, she was selected to participate in the highly competitive merit-based Fulbright exchange program and in 1954 she travelled to the University of Freiberg in Germany as a Fulbright Scholar.

Upon her return to the United States, Guttentag pursued her doctoral degree at Adelphi University where she entered the Clinical Psychology doctorate program. Under the supervision of Dr. Harry I. Kalish she completed her Ph.D. dissertation entitled “The Effect of Verbal Reinforcement and Word Frequency on Visual Duration Thresholds” and graduated in 1960. Over the next five years, Guttentag held several academic positions at multiple universities within the New York region, where she taught a number of courses ranging from statistics and research methods to group behaviour. With exposure to a plethora of psychological topics, Guttentag found social psychology to be more aligned with her interests and began to re-evaluate her research career in clinical psychology. Accordingly, her subsequent academic posts and projects were reflective of this change in focus.

While working part-time at Queen’s College, one of the 24 institutions associated with the City University of New York (CUNY), Guttentag met Florence Denmark, another young psychologist and feminist. By the early 1960s, both Guttentag and Denmark were balancing marriage and motherhood while simultaneously building their professional careers. Their shared goals, passion for success, and life paths quickly sparked a friendship and the young scholars began to collaborate. Their collaboration led to a number of co-authored publications in the mid- to late-1960s; one of their major projects was an investigation of the effects of college re-entrance on mature women.

Toward the end of the 1960s, Guttentag’s academic career really began to take off. In 1966 she obtained an assistant professor position at Queen’s College and within four years she was promoted to associate professor. Shortly after, she received yet another promotion and was working as a full professor by 1972. During the early 1970s, Guttentag simultaneously took on several roles that propelled her to national prominence. From 1970-1972 she served as director of the Harlem Research Centre, an affiliate of CUNY. In 1972, she taught at Harvard University as the Richard Clarke Cabot Visiting Professor of Social Ethics, a subdivision within the Department of Psychology and Social Relations. Guttentag also served as director within two research centers associated with Harvard, The Center for Evaluation Research and The Social Development Research Center. In addition to her other roles, Guttentag was elected President of the Society for the Psychological Study of Social Issues (SPSSI) in 1971, only the second woman to hold the position. SPSSI’s goals were allied with Guttentag’s own interests in gender equity, the reduction of poverty, intercultural matters, and school psychology. During her presidency, she edited two issues of the Journal of Social Issues, the affiliated journal of the organization, both devoted to the topic of poverty. In 1975, her post-doctoral work was recognized by Adelphi University when she was elected to the University Academy of Distinction, an honour bestowed upon select alumni.

By the mid-1970’s, Guttentag’s advocacy for women’s rights led her to initiate two major projects. In an attempt to produce more women-focused research, the National Institute of Mental Health (NIMH), the largest research organization in the world devoted to mental illness, requested Guttentag’s assistance. After completing a thorough literature review on women’s mental health at the organization’s request, Guttentag revealed the overrepresentation of women among the clinically depressed. Collaborating once again with Harvard University and funded by the NIMH, Guttentag became director of the Families and Stress Research Project, a group designed to examine the factors that contributed to women’s depression. In the process of hiring observational researchers, Guttentag met and hired yet another aspiring feminist psychologist Deborah Belle, and this opportunity provided a stepping-stone for Belle’s own academic career. Guttentag’s final research initiative before her death was inspired by Mozart’s opera “The Magic Flute”. While attending an English version of the performance with her second husband, Paul Secord, and her two children, Marcia was astounded by the stark contrast with which women were regarded in Mozart’s era in comparison to the late seventies. While an emphasis on monogamy and romantic love were the themes of the opera’s lyrics, the popular music of the 1970s tended to de-value women and often made casual reference to fleeting sexual encounters as opposed to marriage. Guttentag attributed this change in perspective to the sex ratio, theorizing that there were proportionately more women than men in her time period as compared to Mozart’s era, which in turn affected relations between men and women. The assumption led her on a research path where she delved into various cultures and civilizations throughout history in an attempt to examine the effects of sex ratios on social systems. Guttentag drafted five chapters of the project before she passed away. The incomplete manuscript was extended by her widower Paul Secord, and in 1983 the book Too Many Women? The Sex Ratio Question was published.

Although Marcia Guttentag’s career was shortened by her untimely death, her multitude of achievements left a deep impression on the field of social psychology. She assumed a number of professorships and leadership roles, and authored and edited numerous books, book chapters and research papers within only two decades of her doctorate degree.