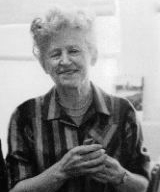 The interwar period of the early twentieth century saw an influx of European psychologists to the United States, including many women. Such psychologists included Kurt Lewin, Tamara Dembo, Eugenia Hanfmann and Kurt Koffka. Another notable European émigrée was Maria Rickers-Ovsiankina, whose experiences in both Europe and the United States had an impact on her long and influential career in teaching, research and psychological practice.

Rickers-Ovsiankina was born in 1898 in Chita, Siberia to a wealthy family. Her father was involved in establishing the first Russian-Asian Bank, and later owned a very lucrative coal mine. Known as Marika to her family, Rickers-Ovsiankina moved to Berlin following the Russian Revolution. This move was due, in part, to a need to flee the political environment at the time. It was also due to the tradition of wealthy parents sending their children away to school. At a young age, Rickers-Ovsiankina had developed an interest in studying the personalities of fictional characters and she wanted to pursue this interest in university. However, there was no program available to her at the time, so instead she enrolled at the Psychological Institute at the University of Berlin to study personality.

University proved to be a unique networking opportunity for Rickers-Ovsiankina that would greatly impact her upcoming career. While at the University of Berlin, Rickers-Ovsiankina took courses under the instruction of Kurt Lewin. Her classmates included Tamara Dembo, Gita Birenbaum, and Bluma Zeigarnik, all of whom would later go on to make substantial contributions to the field of psychology. Years later, she would also get the opportunity to collaborate with many of her Russian and German comrades while working in the United States. So inspired by the work of Lewin and her classmates, Rickers-Ovsiankina decided to continue her education by pursuing a graduate degree at the University of Giessen. In 1928, she completed her PhD. Her dissertation focused on the experience of being interrupted while attempting to complete a task.

Once Rickers-Ovsiankina had finished graduate school she remained in Germany for several years, holding a number of psychology-related jobs. She worked for a short time as a researcher, a teaching assistant, a counsellor and she even held a position working in a prison. She was unfulfilled in these jobs, however, and in 1931 she made the move to America where she connected with Dembo, and Eugenia Hanfmann, another European psychologist trained by Lewin. The three worked together at Worcester State Hospital in Massachusetts where they often reminisced about their upbringings, speaking Russian, German and English.

At Worcester Rickers-Ovsiankina began her work with schizophrenic patients. She applied her doctoral research and considered the impact of interruption on their ability to complete a task. Rickers-Ovsiankina became very invested in these patients and even considered many of them her close friends. Despite forming so many close connections while at Worcester, however, Rickers-Ovsiankina soon left the hospital to accept a much-coveted academic teaching position. During this time period, men held the majority of academic positions while women worked in the applied fields. So in 1935, knowing how important it was to be offered the job, Rickers-Ovsiankina began working at Wheaton College where she would remain for the next 14 years. She not only taught psychology at Wheaton, but also a few courses in Russian.

Following the end of WWII, Rickers-Ovsiankina was offered a prestigious position at the University of Connecticut. In 1949 she was enlisted to develop and direct the university's clinical training program. While working in the clinical field, Rickers-Ovsiankina became highly interested in psychological testing, particularly the Rorschach test. She wrote many books on the topic, and one reviewer of her work stated, "[s]he emphasizes the importance of concepts derived from academic psychology, applied to Rorschach conceptualization, as well as the major contribution that Rorschach data can make to the psychologist who would study such areas as, for example, emotion, cognition, perception, and motivation," (Handler, 1995, p. 170).

Although she preferred research and clinical practice to teaching, Rickers-Ovsiankina held numerous teaching positions over the course of her life. She taught briefly at Mount Holyoke, the University of Oregon, Cornell, Harvard, and Northeastern Universities. Despite most of these engagements only being part-time or summer positions, Rickers-Ovsiankina always made it evident that she refused to conform to didactic, rote, methods of teaching. She felt that the learning experience should be thought-provoking and inspire creativity, not be reliant on quizzes and the testing of knowledge. Her determination to teach her way often led people (especially administrators) to judge her as pushy and strong-willed.

In 1965, Rickers-Ovsiankina retired and moved to California. There, she continued to teach courses at the University of California, Berkeley for many years. She died in 1993, and was buried in her family plot in Germany.

Rickers-Ovsiankina, M. (1937). Studies on the personality structure of schizophrenic individuals: I. The accessibility of schizophrenics to environmental influences. The Journal of General Psychology, 16(1), 153-178.