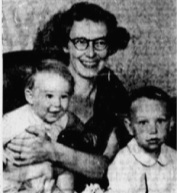 This interview was conducted by C. Roger Myers on April 15, 1970 and is housed in the C. Roger Myers Oral History Collection, Canadian Psychological Association Archives, National Archives of Canada (CPA Archives, MG 29 I 161).

Marion MacDonald Wright was born and grew up in a small town in New Westminister, British Columbia. Her father owned a small shoe store where the local mill workers would bring their logging boots for repair. Both of Wright’s parents were from the Outer Hebrides, a small island off the coast of Scotland and had emigrated to New Westminister. Wright’s mother was very ambitious about higher education and went to train as a nurse at the Royal Academy of Inverness on a scholarship. Wright also had two siblings who went into higher education, her brother becoming a professor at McGill and her sister teaching at a school in California.

Growing up, Wright recalls a happy childhood where she succeeded at everything she attempted to do. When Wright finished high school her mother and relatives pushed her to attend normal school which Wright recalls as a “complete and utter waste of time.” In normal school, Wright enrolled in a child psychology course where she laments that the course focused on teaching kids how to make things like stuffed animals and science experiments and neglected any study of the actual child. She decided to follow her own ambitions the subsequent summer and attended university the next year for journalism. Wright’s family decided to move to Vancouver and settled in a house on the University of British Columbia campus. This was convenient for Wright who walked to class in two minutes and was able to work on campus at the Schoolboard office to help pay her university fees.

Starting her arts degree in 1940, Wright enrolled in a broad range of courses including French, English, biology, psychology, and philosophy. At the time that Wright was a student at the university, John Allen Irving became the new head of the Arts Department who greatly influenced Wright who recalls him as “the most brilliant lecturer and most wonderful professor I could imagine.” Wright remembers Irving’s classes packed with students who would attend his lectures even if they were not enrolled in his class. Anyone who attended Irving’s lectures had to be silent for fear of being kicked out of class by Irving who Wright described as strict and difficult to get along with yet also a brilliant stimulating lecturer. Irving captivated Wright with his teaching and played a significant role in her academic career.

In Wright’s third year of university she went on an exchange trip to McGill University where she took international law and drama. Her true dream had been to go to France but was restricted by cost and so she settled for Montreal. That summer Wright stayed in Montreal and worked as the first reporter for the Gazette which she thoroughly enjoyed and loved. Wright’s ambition to be a journalist prompted her to write an article on the French-Canadian problem which was published in the News Harold in Vancouver. She continued on as a part-time reporter at the News Harold during her last year of university at UBC. Wright later remarked: "It was a fine time for a woman to be a reporter, when men reporters were hard to find. I got all kinds of chances at interesting beats and feature stories."

Wright completed her exams during her final year with an average over 90 and was awarded a scholarship. Wright continued to work at the News Harold when she graduated but was persuaded by Irving to return to UBC as his assistant and enroll in Master classes. Wright left the News Harold with little hesitation and completed her Masters at UBC. After graduating with her MA, Irving encouraged her to apply for her PhD at Brown University. Having no money and worn out by school, Wright yearned for something different and found a job at the Film Board. In the meantime, Irving received a call from the Department of Veterans Affairs Hospital who were looking for a psychologist and he promptly recommended Wright for the position. Wright had some psychology experience administering Rorschach ink blots to Sikhs in Vancouver when she conducted research for Irving and his colleague. Although Wright did not have any formal training in clinical work, very few individuals did, and she was hired for the position at Shaughnessy Hospital where she remained for five years.

While working at Shaughnessy Hospital, Wright’s clinical training resulted from on the job experience where she conducted group therapy and involved herself in the growing Psychiatry Department. From her experience, Wright became known as the first clinical psychologist to practice on the West Coast. The growing psychiatry unit at Shaughnessy prompted them to appoint senior consultants including Bill Line, Mary Ainsworth, and Magda Arnold.

In 1948 Wright left for Toronto for a fellowship at University of Toronto in psychology. While in Toronto she taught a course in personality appraisal and served as a consultanting psychologist at Sunnybrook Hospital. She had initially planned to go to University of Chicago for her PhD but Bill Line implored her "Please don't go to Chicago. Consider us in Toronto." There Wright "met her fate" as she put it: Morgan Wright who was completing his PhD in psychology at the University of Toronto. The year after Marion married Morgan she became pregnant and was not able to continue in the PhD program at Toronto as planned. She decided to continue working on the fellowship until her child was born.

In 1953 the Wrights moved to Regina with their two young sons where Morgan worked as a psychologist at the Medical Arts Clinic in Regina. A Regina newspaper article following the move described Marion MacDonald Wright as "Young, attractive and sparkling" and highlighted her psychology background: "Mrs. Wright probably knows more about raising young children than the average young mother." In the midst of her many accomplishments Wright struck a modest note, commenting about her and her psychology colleagues: "We used to think we knew all about children. Of course, that was before any of us had families of our own." It appears that after this move Wright never went back to psychology full time, only occasionally teaching introductory psychology courses.